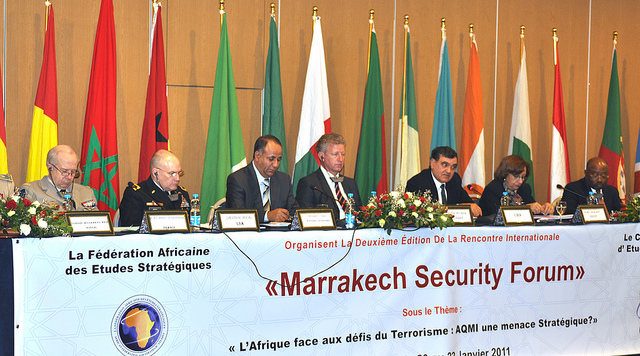 There were several recent events that indicate a stronger US government determination to take a more proactive posture in combatting terrorism in North, Central, and East Africa. The first was the announcement by Secretary of Defense Mattis of three new named contingency operations including Operation Yukon Journey, a counterinsurgency operation and two other counterterrorism operations in northwestern and eastern Africa. “While reports as recently as August noted the footprint of US forces on the continent were expected to be reduced by hundreds, a larger training presence could be on the horizon,” according to a post in Business Insider. This was reinforced by a recent CNN report, that “One defense official told CNN that the planned reductions would reduce the number of US counterterrorism troops and their enablers who support operations by approximately 25%. Officials say the projected plan will reduce the total number of US forces assigned to US Africa Command by “less than 10%.”

What this means will be rolled out over the next three years. The Pentagon has made an assessment that more must be done to contain and defeat terrorism in Africa by empowering local troops and communities. The Defense Department IG staff has submitted questions about the operations “The objectives of the operations, the metrics used to measure progress, the costs of the operations, the number of US personnel involved, and the reason the operations were declared overseas contingency operations,” according to the report.

CNN further noted that, according to two officials familiar with the decision, the plan “will realign counterterrorism resources and forces operating in Africa over the next several years” in order “to maintain a competitive posture worldwide” while also adopting a more “sustainable” approach to counterterrorism.

Maj. Gen. Roger Cloutier Jr. is the newly appointed commander of Army Africa (AA), based in Italy. He believes that “one way to improve joint force readiness and training with partners could be to deploy a Security Force Assistance Brigade, or SFAB, to the continent. The SFAB is a relatively new concept of an entire brigade specifically built and designed to train, advise, and enable foreign militaries and police forces.”

In an interview with the Army Times, he said that this new impetus will require a rewrite of the Army Africa’s campaign support plan which has as a major component an emphasis on AA’s overall priority for readiness and plans to better train African partner forcenon-commissioned officers. As he said, “We have the responsibility to serve as a Joint Task Force headquarters, and as part of that we have an early entry command post (EECP). Part of that responsibility is ensuring our EECP is trained and ready to deploy, because if the [combatant commander] calls and asks us to deploy as a joint task force, we need to be ready to do that.”

Over at the State Department, there was also momentum in dealing with threats emanating from Africa with the appointment of Dr. J. Peter Pham as Special Envoy for the Great Lakes Region of Africa. This critical area, which abuts the Sahel region, continues to experience a high level of internal conflict and penetration from foreign and domestic terrorists. As the State Department announcement indicated, “Dr. Pham will be responsible for coordinating the implementation of US policy on the cross-border security, political, and economic issues in the Great Lakes region, with an emphasis on strengthening democratic institutions and civil society, as well as the safe and voluntary return of the region’s refugees and internally displaced persons.”

With decades of Africa experience as an analyst and policy advisor, Dr. Pham brings a wealth of insight, credibility, and contacts to a job that could very easily be the next powder keg in Africa.

Congress is also indicating its concern with terrorism in Africa. House Homeland Security Chair Michael McCaul (R-TX) and a senior member of the Foreign Affairs Committee, recently authored a bill that directs the Trump Administration to work in cooperation with counterterrorism programs (CT) with North African and Sahel governments. The Trans-Sahara CounterterrorismPartnership Act, (TSCPT) “Codifies this partnership and allows the TSCTP to confront the ever-growing threat of terrorism in Africa,” McCaul wrote in an op-ed in The National Interestin September. “Furthermore, the bill requires the State Department, US Agency for International Development (USAID) and the Defense Department to coordinate counterterrorism strategy with our African partners and deliver that strategy to Congress.”

Under the TSCTP, initiated during the George W. Bush Administration, the United States provides military, law enforcement and logistical support to US partners in Tunisia, Algeria, Morocco, Mauritania, Mali, Chad, Niger, Nigeria, Senegal, Cameroon and Burkina Faso. The bill was adopted unanimously by the House Foreign Affairs Committee, an indication to some that there is “bipartisan anxiety over what many lawmakers consider to be the Trump administration’s relative inattention to the region. As hundreds of former Islamic State (IS) fighters return to North Africa following the collapse of their would-be caliphate in Iraq and Syria, McCaul and other legislators fear the region could become the next major hotbed for militant groups to plot terrorist attacks abroad.”

According to the article in Al-Monitor, Congress already asked the administration to provide more information on a North Africa strategy, including a section on how US assistance dollars in the region would be prioritized to “address economic and security needs.” Despite cuts elsewhere to foreign assistance programs, the TSCPT is slated to receive an increase. “In an effort to take more ownership over the trans-Sahara initiative, the bill also requires the State Department to submit a detailed notification to Congress 15 days before obligating funds for any activity under the program. It also requires the State Department, Defense Department and USAID to submit “a comprehensive, interagency strategy” on how the Trump administration will use the program to counter terrorism in North Africa and the Sahel.