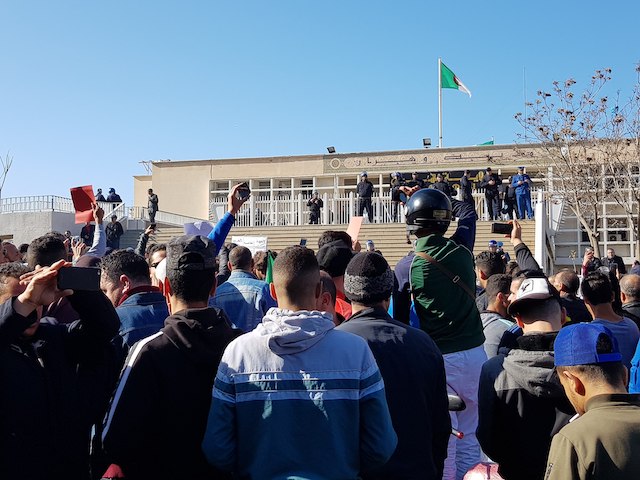 The city streets in Algeria are once again full of protesters. It is not the cost of living or the lack of employment opportunities for youth that has the crowds singing anthems and carrying signs.  It is the idea of a fifth term as president for an enfeebled and seriously diminished Abdelaziz Bouteflika that has the demonstrators demanding change. Since his medical emergency in 2013 when he was hospitalized at Val de Grace in Paris following what was reported to have been a severe stroke, the 82 year-old Bouteflika has been only sporadically seen in public and is confined to a wheel chair, reportedly with only limited capacity to speak or write.

“Le Pouvoir,” as the political leadership of the country is collectively and commonly known, is reportedly divided both within and among its various opaque cliques, none of which alone seems to have sufficient clout to impose a successor to Bouteflika. Competition for the succession has been underway and roiling Algeria’s political elites for years.  No compromise candidate has emerged, other than the current unpopular attempt to maintain the status quo and back Bouteflika for another term of office. No other candidate has sufficient support from enough of the various cliques that govern the country, and it is clear that “Le Pouvoir” is not about to allow the issue to be settled in anything like a free and fair election. The last time they tried that in 1991 it resulted in a bloody civil war that claimed more than 250,000 lives and lasted the better part of a decade.  An older generation remembers the carnage and that may account for the peaceful behavior of the mostly young people who are in the streets today.

So far, the street demonstrations in Algeria have been remarkably free of violence on the part of the protesters, though the security forces have been less restrained and Internet and social media access to and from the country is spotty at best.  Algerian television is not covering the trouble in the streets.

Clearly, the Algerian state is fragile and, as many observers have been saying for the last several years, where it goes from here is uncertain at best.  How Algeria copes with this core crisis leaves many observers with a great sense of uncertainty. Many of Algeria’s international partners had seemingly resigned themselves to that uncertainty as the least bad option, hoping that it might be more sustainable than some rare critics have suggested. Public critique of Algerian politics from international sources has been muted and infrequent.  However, popular sentiment in the country may not permit this kind of continued state of forced nostalgia whistling past the graveyard if the protests grow in strength and persist.

It is difficult to imagine that the Algerian state will voluntarily choose to take any kind of decisive action outside its attempts to manage its own domestic political turmoil in these circumstances. That does not bode well for Horst Kohler’s effort to achieve a breakthrough on the Western Sahara.  This issue is not existential for most Algerians, but it is a potential political conundrum for the various cliques that aspire to succeed Bouteflika. Any major deviance from long established Algerian policy by any of the competing cliques that might favor a compromise with Morocco runs a serious risk of exposing that faction to attack from others among the various political elites. There would be little, if any, domestic political reward for such courage. Any potential applause from the international community would probably be of even less value.

It all gives me a certain sense of déjà vu.  The perceived fragility of the Algerian state has a history of intruding upon attempts to resolve the Western Sahara, sometimes positively but more often not. The United Nations was able to broker a ceasefire and put in place (an admittedly flawed) process to resolve this question in 1991 at the outset of Algeria’s decade long blood-letting. That process produced no positive momentum towards a solution, but it did buy time for Algeria to settle its major domestic issue.

By the time it was clear that the original UN effort had failed and its management was driving a serious wedge into the bilateral relationship between Morocco and the United States, Washington and the Security Council set off in search of a negotiated political solution. Nevertheless, caution, relief, and a desire not to reignite political instability was still the order of the day in dealing with Algeria. The US and most of the Security Council eventually came to support the vague idea of a “mutually acceptable political solution,” but neither Washington nor others of weight on the Security Council were willing to exert much pressure on Algeria to move towards a fundamental compromise.  Instead, the international community settled in behind a de facto policy of simply maintaining a status quo that did the least amount of perceived harm to any of the Parties involved in the dispute.

Now, along comes a new Administration in Washington and a new Personal Envoy for the Secretary General, both imbued for different and perhaps not entirely compatible reasons with a renewed ambition to attack this problem with more resolve.

I sense the “new resolve” already beginning to slip in conflicting and confusing media reports concerning Mr. Kohler’s next meeting of the Parties. Some reports suggest that Kohler still plans to convene all the Parties in Berlin in March. Other reports indicate that Kohler now only intends to invite Morocco and the Polisario Front to the next meeting. That would be a major step back from the “progress” of the last meeting in Geneva in December whose signal achievement was Kohler’s success in getting Algeria to the table for the very first time. Other troubling reports also suggest that Kohler plans to shift attention in the next round of meetings away from the need for compromise and realism to resolve the core political issue and back to a discussion of confidence building measure in an effort to bring the Parties closer together. That would represent another step back in the process. If true, Kohler might want to consult with former Personal Envoy Chris Ross who made this approach the center piece of his strategy to no avail.

Given the current serious domestic political turmoil, has Algeria decided to step back again on the Western Sahara and boycott a new round of discussions? Is that acceptable to the Security Council? Will Morocco agree to a meeting in Berlin with only Polisario participation? If Morocco refuses, what does that do to the new resolve? Will Washington continue to threaten to withdraw its support for the UN process if progress cannot be demonstrated quickly?  Can any real progress be achieved by once again retreating from the core political issue?

History argues that there will never be a convenient moment to move the Western Sahara issue forward. The stars will never be perfectly aligned.  What is necessary to make real progress on the core political issue today is the same as it has ever been.  The powers-that-be on the Security Council, both collectively and individually, need to decide on a path forward and make clear to the Parties their need to cooperate. Talk of the need for compromise and realism in UN reports to the Security Council must be backed up with a new resolve in the Security Council itself to define the parameters of a “mutually acceptable political solution” and ensure that the Parties, all of the Parties, whatever their domestic political circumstances, understand that those parameters represent the only way forward.