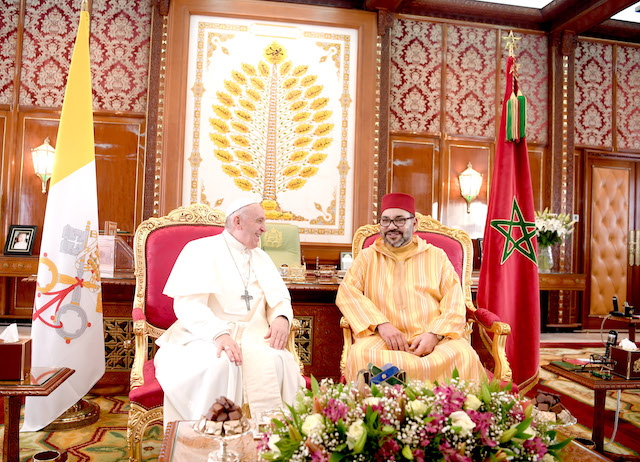 The first encounter of St. Francis of Assisi and Sultan Malek al-Kamil in 1219 has long been a subject of great interest and the topic of several scholarly articles. In Morocco this past weekend, on the 800thanniversary of that first encounter, another Francis, Pope Francis I, and King Mohammed VI met in what will hopefully be an important chapter in this tradition of dialogue between the Catholic Church and Muslims.

In a video message to the Moroccan people ahead of his visit, Pope Francis said he was making the trip as a “a pilgrim of peace and of fraternity, in a world which has great need of both” and called on Christians and Muslims to respect each other’s diversity and help one other.

King Mohammed reserved an extraordinary reception for his guest, welcoming him at Rabat airport and accompanying him through throngs of people to the Mohammed V mausoleum where both spoke to a crowd of Muslims, Christians, and Jews.  In his address in the presence of Pope Francis, which he gave in Spanish, English, Arabic, and French, King Mohammed VI called the latter’s visit “exceptional” and recalled that during this “blessed month of Rajab…Islam and Christianity experienced one of the most emblematic episodes of their history…the Muslims fleeing persecution, left Mecca and found refuge with the Negus, the Christian King of Abyssinia.  This was the first act of welcome…between the Muslim and Christian religions.”

Further describing the difficult challenges facing the world, the King said, “In a world in search of direction, the Kingdom of Morocco has never stopped proclaiming, teaching, and experiencing, on a daily basis, brotherhood among the Sons of Abraham.” He went on to call for a new and evolving dialogue that goes beyond understanding and tolerance, based on education to tackle radicalism.  “Today religion should no longer be an alibi for ignorant people, for ignorance or for intolerance,” he said.

The highlight of Pope Francis’ trip toMorocco was his visit to the Mohammed VI Institute, a school of learning for imams that epitomizes Morocco’s efforts to promote Maliki Islam, a school of moderate Islam that educates religious leaders from Africa, the Middle East, and Europe. The Pope praised Morocco’s steadfast belief in and support for interfaith coexistence, and the promotion of the true path of Islam.

In this regard, the encounter of St. Francis and the Sultan in the 13th Century was repeated. “It is said that in the encounter of 1219, both men professed their faith in God, showed respect for each other, and came to see they had much in common, as they both seemed to see beauty, truth, wisdom, and goodness in one another.”

Pope Francis praised Morocco as a “model of religious moderation and migrant welcome, warning that border walls and fear-mongering won’t stop people from exercising their rights to seek a better life elsewhere.”  He also expressed his hope that Morocco would continue to be a “model of humanity, welcome, and protection for migrants.”

In a meeting with more than 80 migrants in Rabat, the Pope expressed the empathy and the awareness of the Church by saying, “You are not the marginalized; you are at the center of the Church’s heart… The Church is aware of the sufferings that accompany your journey and she suffers with you.”

On the topic of Jerusalem, the King and Pontiff declared in a joint statement that they were “deeply concerned for its spiritual significance and its special vocation as a city of peace.”  They went on to sign a joint appeal calling for the protection of its multi-religious character, stating that the city’s sacred sites must be accessible to worshippers of all faiths.

In an earlier interview, Fr. Michael Calabria, Director of the Center for Arab and Islamic Studies at St. Bonaventure University and a leading Catholic scholar on Islamic Studies, stated, “St. Francis and Sultan Malek al-Kamil saw beyond their religion, nationality, and culture and saw each other sharing in faith and common values. What made this incident so significant was they saw each other as God’s creatures and as persons of faith.”

Fr. Calabria believes that the visit of Pope Francis I with King Mohammed VI will be a historical encounter, one continuing an important tradition, concluding, “I hope this meeting will continue to demonstrate to the Muslim communities that their Catholic brothers and sisters will be their partners as they face the many difficulties of the world.”

From the reports coming out of Morocco, it looks like both the Pope and the King have enriched and reenergized a new and determined dialogue that embraces the true significance of the 800th anniversary of the first encounter between the Catholic Church and Muslims.