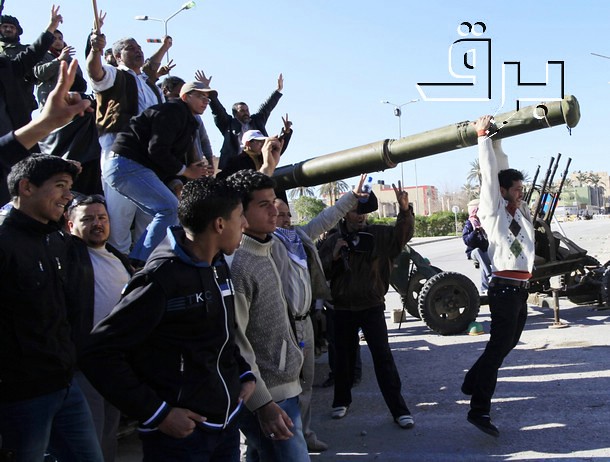 Protesters opposed to leader Muammar Gaddafi climb on the tank of Libyan army defectors in the centre of the city of Zawiyah, 50 km (30 miles) west of the capital Tripoli, March 1, 2011. Photo: BRQ Network

Fifty years ago, I was graduating from college, and a little known 27-year old lieutenant in a little known country governed by a little known king staged a coup and bequeathed to the world the Libyan Arab Republic, which morphed into a Jamahiriya – a state of the masses. The lieutenant promoted himself to Colonel and then “Brotherly Leader and Guide of the Revolution of Libya.” My, how I miss Muammar al-Gaddafi, the eccentric, erratic, despotic, autocratic, dysfunctional leader who left Libya with an awful legacy.

As Al-Araby UK noted, “Fifty years after Gaddafi’s seizure of power, Libya still feels the effects of his rule. While Libya’s current instability may make it seem, on the surface, that Libya was better off – or at least more peaceful – under his rule, the roots of what Libya is experiencing today lie in the unique dictatorship he imposed on the country, which presented iron-fisted tyranny as a new form of democracy.”

Gaddafi might even relish his destructive legacy that is pitting Arab and European countries against one another in proxy campaigns to determine Libya’s future. Since Libya, like several other Arab countries, is a product of European colonial aggregation of territories that are then given a flag and called a country, there are few coalescing forces for nationalism to emerge. Without external or internal threats, these states flounder in defining an internal equilibrium among competing forces and fall back on divvying up economic and political benefits as their raison d’être without regard to the hard work of institution-building.

And the heat goes on. Ghassan Salamé, the UN Special Envoy, recently warned that without Security Council action, “The country’s conflict could escalate if outside patrons step up support for the warring sides.” He added, “Many Libyans feel abandoned by part of the international community and exploited by others.”

Since the 2011 uprising that led to Gaddafi’s fall, chaos has been a constant. Eastern Libya spouted former General Khalifa Haftar, with his so-called Libyan National Army (LNA) trying to capture the national capital Tripoli in western Libya. His forces are fighting those of the Government of National Accord (GNA) led by Fayed al-Sarraj, which is recognized by the international community.

Sarraj is backed by Turkey and Qatar, while Haftar enjoys varying levels of support from Egypt, the United Arab Emirates, the United States, Russia, and France. Can it get any more complicated? Probably, since there is little interest in resolving the conflict by ceding ground to a third-party or surrendering to one’s opponent. As the Russian UN representative said, “Everybody was in agreement that there is no military solution for the conflict, that the parties should stop hostilities as soon as possible, announce a ceasefire, and return to political negotiations under UN auspices.” Yet neither of the antagonists and their backers will take effective steps to convince their clients that dialog is better than conflict.

And what motivates the continued stand-off? What are the benefits that draw countries to take sides in this obscure yet highly combustible conflict? Some claim that the Gulf countries and Russia want to keep Libyan oil off the market to keep prices inflated. Others point to the fear of more refugees fleeing Africa for Italian and French shores as the logic behind European support for a “strong man” to control the situation.

An article in Foreign Policy focused on the economic consequences of the war and identified why the conflict persists. It mentions that since Haftar’s move to take Tripoli “A panoply of international stakeholders—including China, Russia, Italy, France, and the Persian Gulf states—have become involved in the conflict, dragging it on. Although some of these actors cite the need to slow the flow of migrants from Libya to Europe or the hope of stabilizing Libya as rationales for foreign intervention, they’re also motivated by the prospect of lucrative reconstruction contracts.”

It mentions most prominently the oil industry and infrastructure projects, particularly in the coastal areas along the Mediterranean. “For example, foreign powers are clamoring for dominance over the El Sharara and El Feel oil fields, which lie in southern Libya’s oil crescent; control of offshore oil deposits held by the GNA; and access to crucial ports, such as Benghazi and Ras Lanuf.”

In addition to the countries clearly aligned with either side, China is also waiting to see what opportunities are available in this strategically located country, both for its Mediterranean and Africa location. The game is certainly afoot.

As the article points out, “And so, although Russia has been criticized for blocking a UN resolution condemning Haftar’s offensive on Tripoli and for allegedly deploying private military contractors in support of the LNA’s military activities, it has also maintained active relations with the GNA. This balancing strategy has economic foundations. Russia has printed dinars for distribution by Haftar’s parallel Libyan central bank, while the Russian energy giant Rosneft signed a deal to purchase oil from Libya’s National Oil Corporation in 2016.”

To fully benefit from its positioning, Russia wants to see an end to the arms embargo on Libya as it still holds a $4 billion contract with Gaddafi’s regime and is the prime source of equipment and parts for the LNA air force. The Europeans, Turkey, China, and Russia have rail and port projects, energy infrastructure, highways, and power supply on their wish list. The article goes on to say that “Although the contest for reconstruction contracts has remained out of the headlines, it is a major contributor to Libya’s ongoing war. Even if the war of attrition between the GNA and LNA ultimately dies down, the other geo-economic rivalries in Libya could undermine true reconstruction of the Libyan state, dashing hopes for renewed stability and future prosperity.”