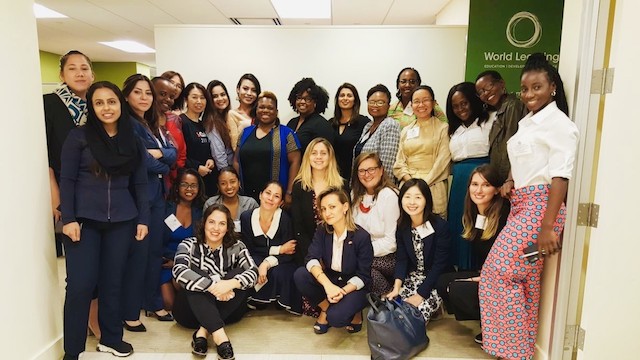 Over the years, I have met many Moroccan professionals committed to becoming the next generation of leaders, entrepreneurs, and role models in their country, even if that means going abroad to take advantage of opportunities that have not yet matured in Morocco. I recently met with Najwa El-Iraki, the founder and managing partner of AfricaDevConsulting, a business development and advisory firm building networks of companies in Africa. She is also Managing Director in North West Africa for Opportunity Network, a global business matchmaking platform headquartered in London that connects CEOs worldwide; and she is the General Representative of Lloyd’s of London in Francophone Africa.

I met Najwa years ago when she was Head of Business Development at Casablanca Finance City Authority (CFCA), a public-private organization dedicated to positioning Casablanca as a regional financial center and a premier gateway into African markets for financial institutions, multinationals, and international professional services firms. She was there at the onset, contributing to the overall strategy for building a regional business and financial center, advising prospective institutional investors, and attracting over 130 international companies to CFCA within a short period of time.

A respected advocate for women in business, Najwa was named one of the 60 most influential women in Africa in 2016 by New African Woman Magazine, and received the Consultancy Award from Corporate Vision Magazine as Financial Advisor North Africa that same year.

We met again recently when she was in the US as one of this year’s participants in the International Visitor Leadership Program (IVLP), nominated by the US Embassy in Rabat and approved by the State Department as the Moroccan representative. Since 1940, the IVLP has offered current and emerging international leaders in a variety of fields the opportunity to experience the richness and diversity of American political, economic, social, and cultural life through carefully designed exchanges that reflect participants’ professional interests and the public diplomacy objectives of the US government.

To date, more than 200,000 International Visitors have engaged with Americans through the IVLP, which counts 30% of the world’s leaders among its alumni. Since she is no stranger to the US, as we had worked together on several promotional tours for CFCA and she holds a certificate in leadership management from Harvard Business School (2016), I asked her why she decided to accept the invitation to the IVLP. Najwa believes that building networks and promoting her country are essential tools for greater international cooperation. In fact, the IVLP is designed to encourage continuing discussions even after the conclusion of the US portion of the program. In this way, strong ties will be formed among these rising leaders that will build long-term ties and understanding.

When I asked her what she got out of the program, considering what she had already achieved, she replied that this was, in many ways, a positive life changing experience. She was part of an enriching program that facilitated conversation around key global and domestic issues and demonstrated the diversity of the United States. Najwa highlighted the opportunity to expand her professional knowledge base, as well as develop leadership skills through interactive workshops, speaking engagements, casual and formal events, and cultural activities. She said that she intended to keep in touch with many of those she met. She also feels more committed to empowering women in the region and is aiming to do so through an Africa focused Venture Capital fund that has already been set up by a friend of hers.

Among her strongest impressions is the value of cultivating and maintaining a growth mindset as the path to the success, for a person and for a country. She admired the Americans she met as « I could largely notice this natural positiveness and humble confidence they have! I was impressed by the culture of voluntarism from an early age, which is clearly contributing to infusing its people with values such as mutual trust and respect, belonging, and empowerment.  I was also impressed by how everyone within an organization shares the same purpose and vision.”

She added, «We also learnt the importance of self-advocacy – As women we should speak up about our needs, champion our own work, and find allies who will help us succeed. As much as education and skill, it’s the ability to self-advocate and owning who you are that can boost a career! »

« Connecting 24 amazing and unique women from so many different countries has helped me realize how supportive women can actually be within the right environment, where as I was always under the wrong perception that women are not good enough at empowering other women! As my IVLP friends from Italy or Mexico said, it’s actually important to « have meaningful relationships (work, friends, love) and to choose meaning over everything else. This was one of the key lessons of the IVLP. »

This was an extraordinary experience for an accomplished professional and a strong endorsement of a very impactful US international program.