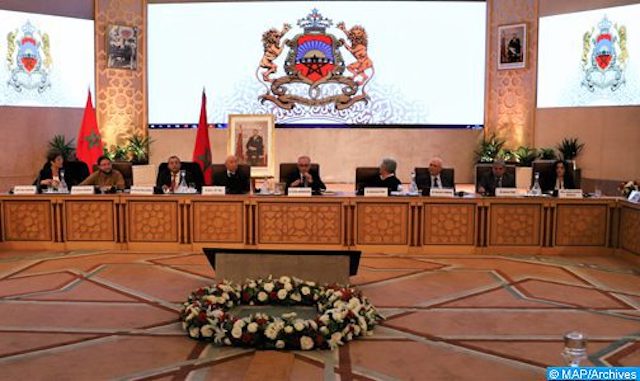 First meeting of the Special Commission on the Development Model (CSMD) at the Academy of the Kingdom of Morocco, under the chairmanship of Mr. Chakib Benmoussa, December 16, 2019 Photo: MAPEXPRESS

As with most African and Arab countries, Morocco faces demographic, governance, workforce development, and wealth inequality challenges. They all must move more proactively to avoid instability from uneven political and economic development. Yet Morocco has distinct advantages in that its political framework, presided over by King Mohammed VI, provides a degree of stability and security that is more durable than its counterparts in the region. As critics are quick to point out, however, this has led to a degree of complacency when it comes to enforcing and enabling human rights, delivering public services, and lessening  income equity by reducing corruption and setting a level playing field for employment and achievement.

A very useful summary of the major issues leading up to the 2021 parliamentary elections was recently published in the North Africa Post. It pointed out that in 2019, the king once again emphasized the need to move ahead with decentralization, a more efficient government, and more successful efforts at economic diversification and job creation across the country. King Mohammed noted on several occasions that the Moroccan government must work more diligently to overcome barriers to economic growth, workforce development, and transparency. So what can we expect in 2020?

There are obvious contradictions: the growth in several manufacturing sectors while agriculture and services, which employ the bulk of Moroccans, grew very slowly or declined due to adverse environmental conditions. Urban migration has enlarged the numbers available for the workforce but they lack the education, skills, and training to fill vacancies. Millions are spent to enhance the quality of life but salaries for professionals in education, health services, and public safety lag behind other sectors so that productivity, morale, and delivery do not meet the needs of society or of workers.

The king’s latest approach, since he seems to be exasperated with the government’s lack of vision and drive to implement reforms to enhance governance and diversify the economy, is to set up a commission to prepare options for a new development model and report to him at the beginning of the summer. Consultations are expected to be broad and publically aired among all stakeholders groups. Lead by former interior minister and Ambassador to France Chakib Benmoussa with a cross-section of experts and advocates, it may be a useful tool to open up the limited public space for discussion, debate, and consensus on an effective strategic roadmap.

Previous to the commission’s formation, King Mohammed had called for a government reshuffling in 2019 that reduced the number of ministers and was supposed to demonstrate a more serious commitment to national development priorities that have languished. He has subsequently asked the head of government to propose reforms to shake up the leadership of public institutions and bodies to focus more effectively on delivery of services. How this impacts the current line-up of leadership is expected in the first quarter of 2020.

As mentioned in a previous blog, the king has doubled down on the importance of decentralization or regionalization to enable greater local decision-making. With the assistance of international donors, the country now has the resources to move ahead with empowering officials and citizens with the capacity-building skills needed for effective and efficient local governance. A first step is that local administrations are now able to hire locally on a contractual basis to meet needs, rather than referring to the central government. Whether or not this will abet or limit corruption in government-related jobs will be a strong indicator of how serious this effort will be.

Other areas of debate in parliament in 2020 include penal reform, women’s inheritance and citizenship rights, human rights, civil liberties, the institutionalization of an independent judiciary, and following up on earlier efforts to promote greater transparency, reduce corruption, and protect whistleblowers.

Education remains key for enabling citizens to more effectively participate in the public space of the country. Among more controversial moves is shifting university education from the French Licence, Master, Doctorat (LMD) system to the baccalaureate format used in the US to enable graduates to have more opportunities in international markets and companies. This follows the decision last year to have upper level science and technology courses in French rather than Arabic to improve employment opportunities for graduates and take advantage of contemporary texts reflecting the marketplace.

Another initiative, which involves the US, is a program “to develop a rigorous primary school teacher training program in order to provide Moroccan teachers with the necessary skills to prepare the youth for tomorrow’s challenges,” as reported in Morocco World News. An outgrowth of the collaboration between the Ministry of National Education, Vocational Training, Higher Education, and Scientific Research with USAID, the goal is “to promote the quality of the teaching across all education cycles, to improve the training of teachers and develop their professional courses in order to equip Moroccan youth with the necessary tools to facilitate their access and integration within the labor market”. The University of Arizona is the counterpart from the US in the five-year program.

These are among the more pressing issues of 2020 that provide the run-up to the 2021 elections. The parties’ positions on these and other issues may provide the first real test of electioneering based on concrete platforms rather than the personalities of the party leadership.