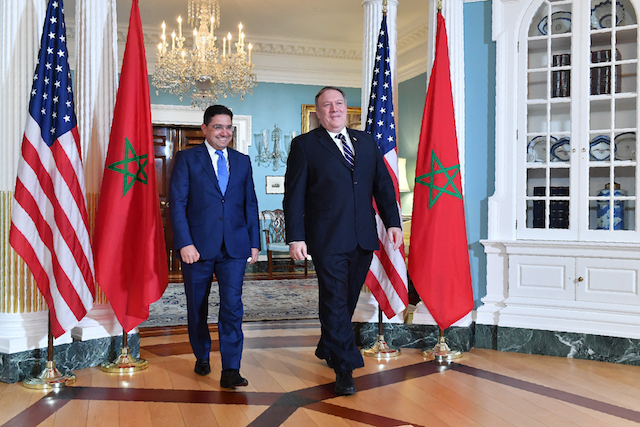 Algeria and the Polisario have had 13 years to accept negotiations on a framework political solution to resolve the Western Sahara problem proposed by Morocco and largely endorsed, at least verbally, as serious and credible by the international community. In my view, that is more than sufficient. Morocco is now well within its rights to move on. Indeed, if it does not, it can anticipate nothing but more of the same from its intransigent neighbor and the continued indifference, or worse, of the international community — content to sustain the status quo for as long as it can be made sustainable.

I argued in the last article in this series that Morocco needs to begin now to prepare the groundwork for new initiatives that will advance its interests in the Sahara. Specifically, I suggested that it needs to begin to prepare the international groundwork necessary to support launching negotiations with the people of the Sahara on a final resolution to this problem based on its 2007 framework proposal to grant autonomy to the region under Moroccan sovereignty.

The first steps in this process should concentrate on Washington and Paris.  Paris because Morocco can depend on solid support from France for new initiatives to resolve the issue in Morocco’s interest, and Washington because US support, never an unconditional certainty, will be critical for any new initiative to succeed.

I suggested earlier in this series that Morocco needs to start now to build the foundations in Washington to support a new initiative by renewing its efforts with its friends in the US, specifically in Congress, among influential think tanks, with former and current US officials who have followed this problem, with sympathetic persons in the US media, and with other key US interest groups that would be inclined to argue in favor of new Moroccan initiatives.

These relationships have been allowed to deteriorate for the last three years and are desperately in need of immediate attention if new initiatives are to have any chance of success.

In the years prior to the Trump Administration, Morocco carried out an active campaign to educate its American friends and other potentially influential voices in the US foreign policy establishment. My conversations over the last couple of years with these individuals and groups confirm that Morocco’s outreach has largely been limited to senior US Government officials directly involved in decision-making on Morocco.  This will be seriously inadequate in dealing with a new Democratic Administration come next January. Morocco should not allow itself to be placed in a position where it will have to scramble just to play catch up with new decision makers in both a new Administration and a new Congress.

I hear from my extensive ongoing contacts in the politically diverse think tank community that Morocco has largely disappeared in the Washington foreign policy conversation. My think tank associates tell me that they no longer have any contact with official Morocco, even when they seek it out. They add that their contacts with unofficial Morocco are even less frequent.

As I suggested in my last article in this series, Morocco is likely to face in a new Democratic Administration many of the same criticisms and obstructions it struggled to master in the last Democratic Administration. Some of the same voices and many of the same schools of thought about US foreign policy will resume their place next January. Morocco will need to be able to answer the challenge from the start if any new initiatives are going to gain early support and momentum.  Failure to have built that support early will leave Morocco vulnerable to arguments that variously favor either doing more of nothing, or worse still, favor more concessions from Morocco to “save face” for its adversaries as well as a renewal of distraction issues that prevent Morocco from focusing Washington’s attention on its core interests.

If Morocco expects new initiatives to succeed, it does not want to be behind this power curve.

On the other hand, if Morocco is unwilling to venture new initiatives on this issue, if it is content in thinking that time remains on its side, that doing nothing more than avoiding disaster in foreign capitals generally, and Washington in particular, is its best strategy, then it should expect that it will face many, if not more, of the same problems it has experienced with previous Democratic administrations in Washington — except likely this time with less favorable outcomes. Less favorable because, having allowed it to lay fallow for three years, it will not have the same broad network of active, well informed and well-motivated friends whose understanding and advocacy it once enjoyed.

It’s a serious choice that has to be made. Either advance a decisive new initiative favoring a positive outcome or stay with the same play book that condemns Morocco to a defensive and potentially unsustainable status quo, the failure of which could be seriously detrimental to existential Moroccan interests.

My counsel for Morocco is to move forward. Do not keep betting that time heals all wounds. As they say, sometimes time also wounds all heals.

In the next article in this series I will suggest some concrete steps that I believe will help Morocco build support for an initiative to move forward on a favorable solution by beginning negotiations soon with the people of the Sahara on the specifics of an autonomy arrangement for the region. Later in this series I will discuss various possibilities for securing viable international approbation for this outcome, both with and without Security Council concurrence.