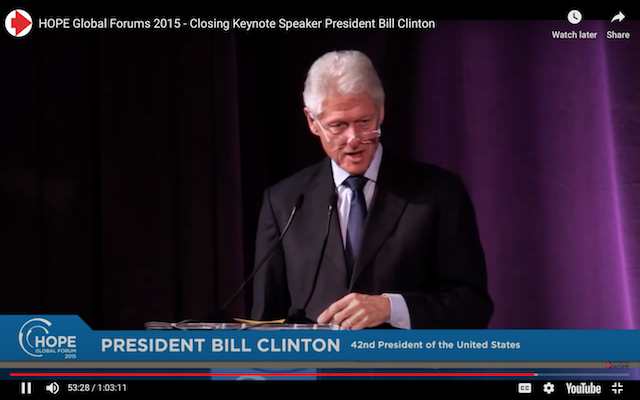 Former President Bill Clinton, at an address at the 2015 HOPE Global Forum in Atlanta, mentioned Morocco as a model country of religious tolerance, otherness and coexistence as shows the concord between Moroccan Jews and Muslims Photo: MAP

Commentators from major news outlets have commented that Morocco will be among the first Arab countries to normalize relations with Israel and exchange ambassadors following the Israeli-UAE agreement. As the former US Ambassador to Morocco and having closely followed the policies and opinions of King Mohammed VI for the past twenty years I am not so sure that Morocco will be next. There are two overriding issues to consider in this regard. King Mohammed VI has consistently and strongly supported a peace agreement between Israel and Palestine, and may see a Moroccan agreement with Israel damaging to such prospects.  Also, the timing to act now, during an election year in the US, may be a deterrent for Morocco to move too hastily.

The king has made his viewpoint clear over the past twenty years with regard to Palestine and used his position as Chairman of the Al-Quds (Jerusalem) Committee of the Organization of Islamic Conference (OIC) to assert strong support for a Palestinian state. At the same time, he has expressed his support for warm and full relations with Israel and seems perfectly situated as the next peace partner with Israel, given the fact that Moroccans are the second largest ethnic group in Israel, after Russians.

Such a move however will have to be balanced with the statements that King Mohammed has constantly committed to over the years in his support for Palestine. In November of 2019, he warned that “the continuing Israeli practices in violation of international legitimacy and international humanitarian law in the occupied Palestinian territories fuel tension, violence, instability and sow the seeds of religious conflict and hatred.” Following the King’s comments, Moroccan diplomats reaffirmed Morocco’s steadfast and unwavering support for Palestine.

In February of this year, a message from King Mohammed VI conveyed to the Palestinian leader, Mahmoud Abbas, by Moroccan Foreign Minister Nasser Bourita, reaffirmed Morocco’s unwavering support to the Palestinian cause. The number of times the King has reiterated his support for Palestine during the past is too numerous to repeat here.

Since the days of King Hassan II, Moroccans have been encouraged to give to the poor in Palestine and have inspired a Moroccan population deeply supportive of a Palestinian homeland. The king would have a hefty price to pay if he went back on his word and didn’t first extract meaningful concessions for the Palestinians, before any agreement with Israel.

Remember also that the king opposed Gulf countries’ pressure on Morocco to support their sanction of Qatar and the war in Yemen. Such stands took courage for a country so dependent on economic development from the Gulf. Analysts who predict that Morocco will be next to sign a peace accord with Israel may not understand the strength of King Mohammed’s moral compass.

The other consideration of Morocco to normalize relations with Israel is timing. There’s a joke in Morocco that says, “I’m not sure who the next US president will be but I do know who the King’s best friend will be”. Morocco has always avoided partisan gestures during US election cycles dating back to the time when Sultan Mohammed III recognized the independence of the US in 1777, being the first country in the world to recognize the United States and among the first countries to sign a treaty of peace and friendship between the two nations. Every monarch since has been careful to avoid the appearance of taking sides in US politics.

Morocco understands that if it’s not early to the peace party they will have less to gain from it. The king will have to balance that notion with his moral authority and long-held beliefs and those of his citizens, to remain steadfast in support of a Palestinian state, as well as considering US election year timing.

There are obvious reasons for Morocco to move quickly towards normalization given cultural and family ties. For these and other reasons, many Morocco watchers believe that when the right concessions are made that include a serious negotiation between the parties that include a contiguous state of Palestine, based upon 1967 borders, with Jerusalem as a capital of both states -and when Morocco is not playing into election year politics – the king will move swiftly to normalize relations.

Moroccan and Israeli citizens already know through their family ties that when that day arrives their new relationship will a peaceful, warm and genuine one.