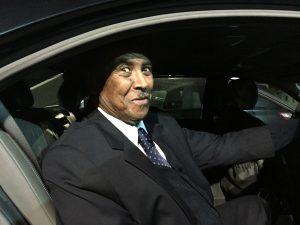 Ahmed Snoussi, Former Moroccan Minister and Ambassador to the UN, and most importantly, close confidant of King Hassan II, passed away this week. He was 92 years old. He was held in high esteem in Morocco as a key figure in the fight for independence and one of the earliest architects of the foreign ministry in the late 1950s. He was also one of the most recognizable and revered personalities in Morocco.

I was a personal witness to the love Ambassador Snoussi received throughout the country. For instance, on the many occasions during our time together in Morocco person after person would come up to him to thank him for his service to country and loyalty to the King.

Among his many friends were former US Secretary of State Madeleine Albright, Governor and former USUN Ambassador Bill Richardson and UN secretary General Kofi Annan, and many heads of state, kings, queens and African leaders. He served in several African nations, including Nigeria, Tunisia, Algeria and Mauritania. Rumor had it that at the request of King Hassan Snoussi took visiting ruler of the Congo, Patrice Lumumba, home on a royal aircraft. Lumumba found Snoussi so appealing that he was asked to stay on as his Minister of Information and adviser to the ruler, but King Hassan demanded his immediate return to Morocco.

I first met Snoussi at the Washington home of then Ambassador Mohamed Benaissa during the first of many dinners together, just before I went to Morocco as US Ambassador. The conversation immediately shifted to the question of the Western Sahara, which would become the center of our conversation for the next three years and would continue for nearly another twenty years after leaving Morocco as Ambassador. Along with my political counselor, friend and confidant Robert Holley, the four of us began a journey to examine and eventually recommend a new US policy on the Sahara.

Within a year and half of our tenure in Morocco, Bob and I were able to convince the State Department that a winner-take-all referendum on the Sahara question, as well the status quo of doing nothing, was not feasible or sustainable. Instead, a political solution proposed the formulation of international autonomy for the people of the Sahara under Moroccan sovereignty.

Ambassador Snoussi, along with Mohamed, Benaissa, who had become Minister of Foreign Affairs, were key to ensuring that the US would support and protect the new Moroccan autonomy initiative, which put the US clearly on the side of Morocco in the resolution of the Saharan issue. A new bilateral and military strategic relationship was also developed during this early reign of King Mohammed VI, an era during which Ahmed Snoussi was a key interlocutor with the US. This era was often referred to as the golden years in the US-Morocco relationship.

Snoussi developed a close and trusting working relationship with his US interlocutors, in no small part because of his appealing and endearing way of doing business. His most endearing quality was his humor. If there was ever a book written on the importance of humor in the conduct of diplomacy, it would have to be dedicated to Ahmed Snoussi. One could never get enough of Ahmed Snoussi, whether it was for a social affair or serious business. He was a consummate storyteller, a charismatic figure and humorist who would draw you in and leave you not knowing where the truth ended and the story started.

Snoussi was close to King Hassan II and King Mohammed VI in large part because he was appealing, good humored and trusted for his advice. This gave him the proximity to power and an opportunity to present his opinions, and an ability to offer tough advice. And these qualities went beyond the Monarch to others he dealt with diplomatically, during tough negotiations with the UN Security Council and in capitols around the world. It was often heard in other capitals when negotiating contentious issues with Morocco, send Snoussi!

He became an uncle to many, in the Royal court and in diplomatic circles. His advice will not be forgotten and his humor will keep us smiling whenever we think of him. Thank you Ammou (uncle in Arabic), Rest in Peace.