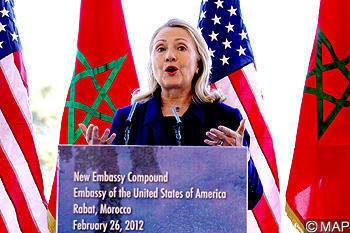 Sec. of State Clinton at new embassy groundbreaking in Rabat

SECRETARY CLINTON: Well, it’s wonderful being introduced by a friend and an ambassador and someone who represents our country so well here in Morocco. And I want to thank not only the ambassador but his wonderful wife, Sylvia, as well, for their tireless work on behalf of the relationship between the United States and Morocco.

I want to begin by thanking the foreign minister for the great hospitality and warm welcome he extended to me and to my delegation. I am so delighted at the prospect of working closely with him and the new government as we take our relationship to a new level of cooperation and partnership. And I look forward to welcoming you, Foreign Minister, to Washington, where we can continue our dialogue. Thank you, sir, very much.

And I wish to recognize all of the people here on the stage with me. I thank them for their tireless work on behalf of humanity, on women, on the law, on the rule of law, on a better Morocco, the work that is done for our embassies around the world, and *Sabi Abdul Baki*, thank you for serving not only in the United States Embassy for 40 years, but serving as a bridge between the Moroccan and the American people. We are deeply grateful.

So to all of you, thank you for joining us on this auspicious occasion. You represent many voices that will help determine Morocco’s future. And I’m looking forward not only to the partnership with the government but collaboration with many parts of Moroccan society for years to come.

As has already been said, our relationship stretches back more than two centuries. Sultan Mohammad III became the first world leader to recognize America’s independence. We entered into a treaty of friendship that has stood the test of time. And in 1820, Morocco presented the United States with a gift, a legation building in Tangier, our very first diplomatic property anywhere in the world. I don’t know how far along we would have made it without Moroccan help, so you’ve been thanked before, but let me thank you again. This is our only national landmark outside our own borders, so the connection between Morocco and the United States is deep and personal.

Now, of course, the way we conduct foreign policy has changed a great deal since those days, and I think it’s fair to say the challenges we face are far more complex, but the opportunities are greater, and the world seems smaller. But that legation building in Tangier stands as a testament to the continuity of our relationship. It has lasted through wars and upheaval. It has remained steadfast in times of crisis. Today, it is a museum and a cultural center that focuses on the rich history between our countries. But what that building in Tangiers preserves and symbolizes is the past. What we’re doing here today represents the future. And we are committed to renewing, in a profound way, our commitment in this new chapter of our long relationship.

I have talked often about how Morocco once again is leading the way, not just here in Morocco, where I have not had the privilege of being for two years, but throughout the Maghreb and the Middle East and beyond. The constitutional referendum last summer and November’s elections signaled an acceleration of reforms that began under his Majesty King Mohammad VI more than a decade ago. And the Moroccan Government is now moving forward with the momentum necessary to deliver on the promise of democratic reform. [Continue Reading… ]