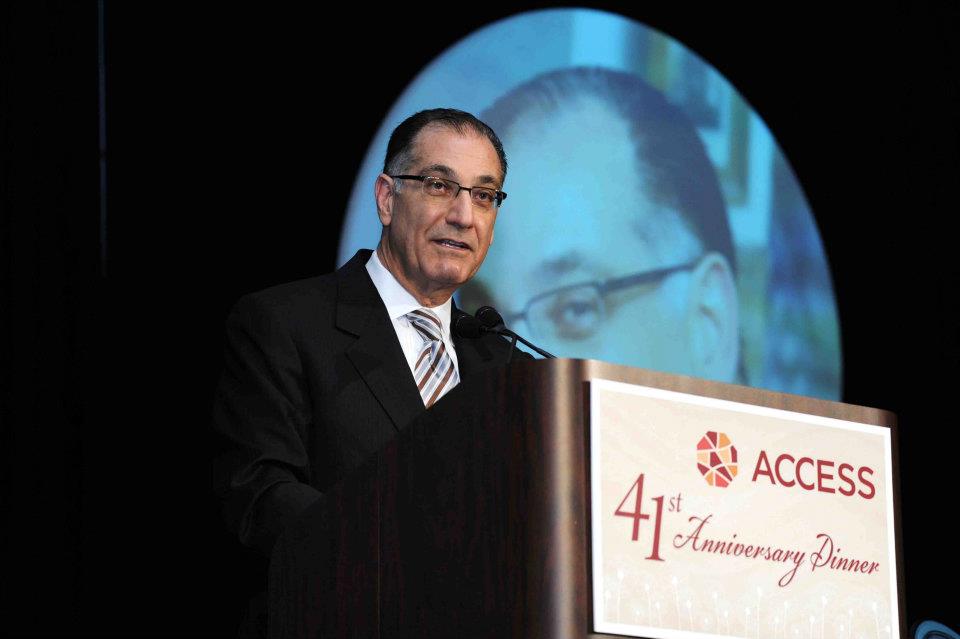 Moroccan American Cultural Center / ACCESS  (Washington, DC, April 30, 2012) — On Saturday, Ambassadors Selwa “Lucky” Roosevelt, White House Chief of Protocol for President Ronald Reagan, and Edward M. Gabriel, US Ambassador to Morocco during the Administration of President Bill Clinton, were honored in Detroit, Michigan as “Arab Americans of the Year” for their distinguished service to their country and communities.

The 41st annual event hosted by the Arab American Community Center for Economic & Social Services (ACCESS) drew nearly 2,000 national and local civic leaders and members of the public at the Detroit Marriott. It coincides with the “Patriots & Peacemakers” exhibit at the Arab American National Museum in Dearborn, MI, which highlights Arab Americans in public service.

Roosevelt served as chief of protocol for the United States from 1982-1989 — longer than anyone has held that position. She was born in Tennessee to Lebanese immigrants and lived there until her marriage in 1950 to Archibald B. Roosevelt, Jr., grandson of President Theodore Roosevelt.

Gabriel, who served as US Ambassador to Morocco from 1997-2001, has been actively engaged in Arab-American relations and issues for decades.  He presently serves as Vice Chairman for the American Task Force for Lebanon and heads the Moroccan American Center in Washington, DC, which promotes US-Moroccan relations.

“I have been blessed in my life to be able to give to my community and my country, and to fulfill dreams that at earlier times in my life I dared not even contemplate,” said Gabriel.  “Yet there is no greater honor than to contribute in some small way to the heritage my mother and father gave to me.  Tonight is the greatest honor I could be given.”

Presenting the awards were Theodore Kattouf, former US Ambassador to the United Arab Emirates and current president of AMIDEAST, a nonprofit supporting international education and development in the Middle East and North Africa; and Peter Tanous, a previous “Arab American of the Year” honoree, Lynx Investment president, and former army lieutenant who received the Ellis Island Medal of Honor in 1994.