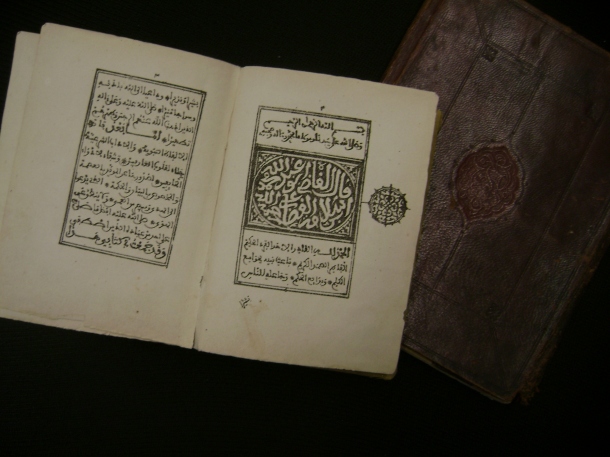 Penn Libraries Blogs, by David Giovacchini (June 6, 2013, Philadelphia, PA) — Recently the Penn Libraries acquired an extraordinary collection of Moroccan manuscripts and early lithographed books.  This unique collection was assembled by Dr. Fawzi Abdulrazak, the leading scholar of the history of printing in Morocco and author of the authoritative bibliography on the subject. The collection now at Penn includes some 108 titles in 136 volumes.

The bulk of the collection dates from 1865 to 1930, covering most of the span of Moroccan lithographic printing from its beginning in the city of Fez to its end during the French Protectorate. Importantly, five of the works included represent the very first lithographic books produced in Fez. In initiating their printing industry, the Moroccans chose the lithographic method over moveable type, because they felt it preserved a link to their country’s rich heritage of manuscript production. Indeed, as in manuscripts, five different types of script were used in making the lithographs. In general, the Moroccan intelligentsia felt that printing would preserve and invigorate their scholarship in the face of French and Spanish challenges by making books and the knowledge they contained more widely available.

Initially, the Moroccan royal court was the driving force in the publishing of the new lithographic books, but soon private printing firms appeared. The collection includes works made by all of the various printers in Fez. The print runs of the Moroccan lithograph books varied from 200 to 300 copies of each title. Nevertheless, most of these prized books quickly went out of print. The lithographs were much sought after due to their first rate materials and printing, their exceptional scholarly worth, and the meticulous editing done to the texts. Over all, the books in the collection are in fine condition, and most are in their original leather bindings. They are rare and superb examples of the printer’s art in the Islamic lands.

Just as when they were first published, the Fez lithographs are of great value for their intellectual content. The collection includes works by over 101 scholars and editors. These men comprised the pinnacle of the Moroccan intelligentsia of the time, and their works represent the pinnacle of Muslim scholarship in North Africa during the last half of the 19th century and the beginning of the 20th. Some of the subjects covered include Islamic law, mysticism, doctrine, religious life, Islamic philosophy, Arabic grammar, and rhetoric.