By all indicators, with the rainfall to date supporting a strong showing for Morocco’s GDP, there are also strong signs that the rate of Foreign Direct Investment (FDI) will match or exceed the projected 4.5+% GDP growth rate.

Investors are buoyed by the continued steps being taken by the government to improve the budget balance, rein in subsidies, generate more jobs, and reduce red tape for companies.

The US government, through the International Trade Administration section of the Commercial Service recently held a webinar on infrastructure opportunities in Morocco. Here is the report from Senior Commercial Officer in Casablanca Douglas Wallace. 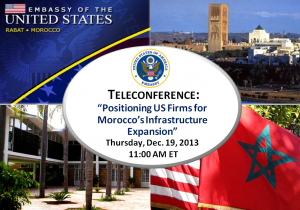 Lussenhop and Wallace emphasized Morocco’s growing strategic importance both in terms of its ongoing stability in light of the regional Arab Spring, as well as its growing role as a regional manufacturing and export platform based on the strength of the Tanger Med port and historic trade links through southern Europe and West Africa.

This event was timed to act as the first salvo in recruiting US firms for the March 10-11, 2014 U.S.-Morocco Business Development Conference in Rabat organized by the Moroccan Government.

This program and the announcement of the second US-Morocco Business Development Conference in March continue efforts started by then-Secretary of State Hillary Clinton in September 2012 as part of the Morocco-US Strategic Dialogue.

At that time, the role of economic dimension of the Strategic Dialogue was to “consider establishing subgroups to address a variety of issues discussed in the working group, such as enhancing regional integration, expanding trade, promoting investment, improving Morocco’s investment climate, strengthening the food security infrastructure and promoting energy development.”

Continued recognition of Morocco’s moving ahead

In a recent article in Modern Ghana, the reporter noted how much Morocco had accomplished since the accession to the throne of King Mohammed VI in 1999. Among the key points he cited are:

These accomplishments are a few of the milestones to date as Morocco faces challenges in youth employment, reducing budget deficits, rationalizing government expenditures for wages and pensions, and expanding its trade and investment activities throughout the region. With continuing economic growth matched by positive trends in the country’s reform agenda, Morocco may well meet its employment targets for youth and women by the end of this decade.