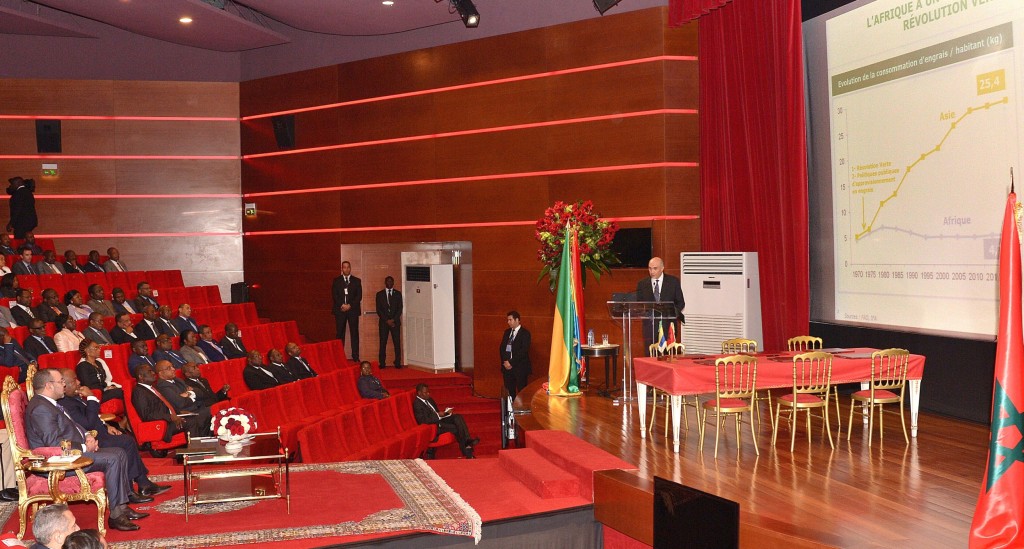 On March 6, the Moroccan King presided over an agreement, in partnership with Morocco’s Office Cherifien de Phosphate (OCP), to build facilities in Gabon and Morocco to produce phosphate fertilizer that will significantly increase agricultural output and food security in neighboring countries in the region. Photo: MAP

Washington, DC (March 7, 2014) — Continuing his journey to promote solidarity and economic cooperation in Africa, King Mohammed VI was in Guinea on March 3-5, where he presided with President Alpha Condé over the signing of 21 bilateral agreements on trade, agriculture, water and energy, industry, and job training. In Gabon on Thursday, the Moroccan King and President Ali Bongo Ondimba established a new strategic partnership to increase food security in Africa by producing fertilizer adapted to different regional ecosystems.

During his visit to the Guinean capital of Conakry, the King, accompanied by President Condé, inspected a state-of-the-art military field hospital set up by Morocco’s Royal Armed Forces to provide surgical and other advanced medical care for Guineans, and inaugurated a new “Moulins de l’Afrique” flour mill on the outskirts of Conakry, a joint 30-milllion-Euro Morocco-Guinea venture that will create hundreds of jobs.

In a joint statement at the end of the Guinea trip, the two leaders praised their predecessors, King Hassan II and King Mohammed V of Morocco and Presidents Ahmed Sékou Touré and Lansana Conté of Guinea, for building strong bilateral ties, and vowed to maintain and enhance the relationship. President Condé expressed Guinea’s continuing support for Morocco’s autonomy initiative to end the Western Sahara conflict.

In their communiqué, Guinea and Morocco also called for the deployment of a strengthened UN peacekeeping force in the Central African Republic. Morocco has already provided military support to help stabilize the country.

On March 6, the Moroccan King’s first day in Gabon and final stop on his trip, an agreement was signed to study and begin construction over the next year, in partnership with Morocco’s Office Cherifien de Phosphate (OCP), of facilities in Gabon and Morocco to produce phosphate fertilizer that will significantly increase agricultural output and food security in neighboring countries in the region, as well as create more than 5,000 new jobs.

“King Mohammed’s visit to Guinea and Gabon continues his focus on African solidarity and the vision he laid out in Cote d’Ivoire,” said former US Ambassador to Morocco Edward M. Gabriel, “where he said that ‘the 21st century should be that of African peoples’ triumph over the ravages of underdevelopment, poverty and exclusion,’ and urged that ‘Africa should learn to trust Africa.’”

King Mohammed VI is currently in Gabon on the last leg of his four-nation African tour, which began in Mali on February 18 and went on to Cote d’Ivoire and Guinea. In the four countries, more than 80 bilateral cooperation agreements were signed—in areas including agriculture, manufacturing, telecommunications, housing, banking, and vocational training—deepening Morocco’s public and private-sector partnerships with its African neighbors.

The Moroccan American Center for Policy (MACP) is a non-profit organization whose principal mission is to inform opinion makers, government officials, and interested publics in the United States about political and social developments in Morocco and the role being played by the Kingdom of Morocco in broader strategic developments in North Africa, the Mediterranean, and the Middle East. For more, please visit www.moroccoonthemove.com