The American Chamber (AmCham) of Morocco, an affiliate of the US Chamber of Commerce, recently visited Washington, DC to meet with US government officials, businesses, and trade associations to brief them on the latest business opportunities. These delegations, where members meet with both public and private sectors to discuss opportunities as well as the challenges to increased transactions, are called “Door Knock Campaigns.”

This is the first Door Knock from Morocco since the AmCham was founded in 1966, coming at a time when the US-Morocco Free Trade Agreement (FTA) is entering its final phase of implementation, and Morocco is looking to rapidly increase its exports to the US and highlight investment projects in the kingdom.  US government meetings included the Commerce and Treasury Departments and the US Trade Representative (USTR).  Briefings were held at the US Chamber and at Citi, providing fresh information on how US companies can participate in Morocco’s vibrant business sector.

Rising from the Atlantic Beaches 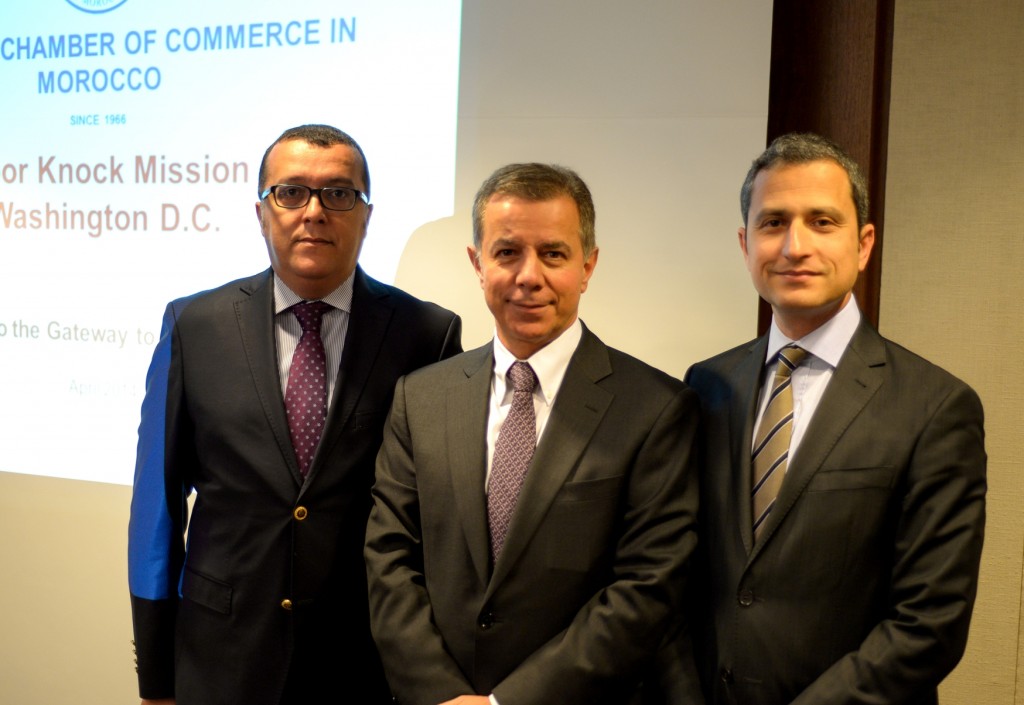 A particularly attractive project is the Zenata Eco City (www.zenataecocity.ma), being built between Casablanca and Mohammedia. Almost a year ago, the government unveiled detailed plans for the project that was chartered in 2006. After years of study by teams of Moroccans and international consultants, the master plan outlined a sustainable eco city, the first in Africa, which is being designed, built, and managed to international environmental standards.

Among the initial projects already awarded are what will be the largest shopping mall in Morocco and Africa, several middle-class housing complexes, and land preparation for sports, education, and health centers. It will have a multimodal train station, a subway/tram connecting it to Casablanca’s system, and direct access to the country’s multilane motorway. Mohammed El Hajhouj and Mohammed Naciri, who are the team leading the US presentations, are already interviewing US universities and medical facilities managers to encourage them to bid on the upcoming tenders for the education and health centers. Zenata’s developers are generating requests for proposals (RFPs) that they believe will be attractive to the leading companies in the specific sectors.

Particularly keen to attract US companies, the Zenata team is planning a fall US road show to promote particular attention to the education and health zones in the city, where the latest best practices will be featured.

A particular emphasis of the delegation was to detail how Morocco serves as a platform for three continents, Africa, Asia, and Europe, due to its location, infrastructure, human resources, and extensive business contacts throughout the region.

Julianne Furman, the CEO of Polydesign Systems, enthusiastically described how her automotive parts manufacturing company, with 18 years of experience in country, participates on the board of the automotive training centers where they are fully involved in Morocco’s programs to develop skills and talents needed for their industry.

Polydesign exports globally from its hub in Tangier Free Zone.

The Casablanca Finance City, designed as a financial services center for Africa, has already attracted 43 international companies as tenants, and is ranked as the second most important financial services hub in Africa, before even taking up its new premises. Abdeslam Taadi of Attijariwafa Bank spoke about his company’s extensive banking interests in francophone Africa, where Moroccan banks are present as top tier institutions. And other delegation members spoke regarding Morocco’s role in the export of agricultural and consumer products.

The delegation was led by Walter Siouffi, chairman of the board and the CEO of Citibank Maghreb; Azzedine Kettani, board member and CEO of Kettani Law Firm, one of the original leaders of the Moroccan-American Trade and Investment Council (MATIC); and Rabia El Alama, the Managing Director of the AmCham.

Although Morocco may appear to be a small market of 34 million people, its 44 preferential free trade agreements, low labor costs, excellent transportation and logistics systems, strong financial services capabilities, and overall positive business environment make it an ideal platform for a regional market of a billion consumers.