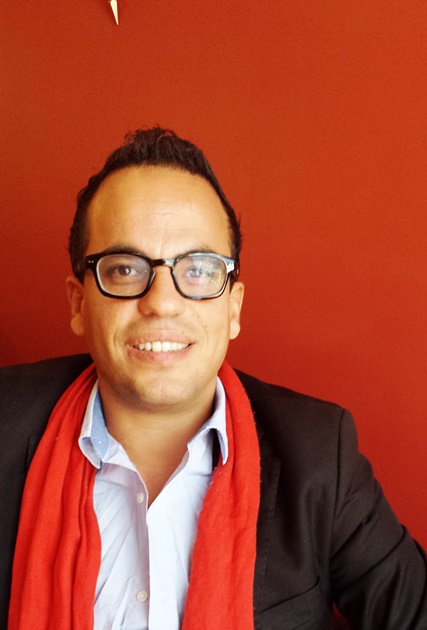 Last May, the Moroccan American Cultural Center screened the internationally-acclaimed documentary “Tinghir-Jerusalem: Echoes from the Mellah” here in Washington DC, as part of our salute to Jewish American Heritage Month and the thriving Moroccan American Jewish community living in the nation’s capital.

As a member of that community myself —my father was born in Safi, Morocco in 1951, and quickly found his way to Magen David Sephardic Congregation when he first arrived in the Washington area in the early 90s—I fell in the love with the film, which tells the stories of Jews from the Moroccan Berber village of Tinghir who, even decades after moving to Israel, consider themselves Moroccan and remember with nostalgia living in a predominantly Muslim country. At a time when peace in the Middle East seems so hard to make, let alone keep, they are heart-warming symbols of hope and possibility. You can imagine how thrilled I was, then, to meet the filmmaker, Kamal Hachkar—a Muslim, Berber Moroccan who grew up primarily in France—in person just a few weeks ago. He was scheduled to screen his film at one of the area’s universities, and I met up with him beforehand at a Moroccan restaurant in Dupont Circle.

Though he narrates in the beginning of his film his reasons for taking on this project—how his grandparents would tell him of the Jews who left Tinghir, how they could not understand what happened to them and what made them leave, how he struggled to understand his own identity growing up a Muslim Moroccan in France and grew curious about a parallel diaspora—I still wondered why he made the decisions he made during filming, and what emotions he felt in tackling these issues.

We sat at the end of a table laden with glass teacups, surrounded by a handful of friends of his—Muslims, Jews, Christians, Moroccans, Americans—sharing a plate of traditional Moroccan salads, all there to support the message of diversity and tolerance that his film delivers.

“Do you see this cosmopolitan mix here?” he asked, referring to the group. “This is what I love—the mixing and sharing of cultures. I find it beautiful.”

It reminds me of a moment in the film where tears are brought to his eyes as he meets a Jewish Moroccan Berber who sings traditional Berber songs about the Atlas Mountains—where Tinghir is located.

What was your feeling when meeting him? I ask.

“It goes back to the philosophy of the film,” he tells me in French. “To know yourself and your culture, but to be truly conscious of it, its singularity, its specificity. When you’re facing your grandmother or grandfather and you see the lines in their faces, to understand where they came from and how and why they see the world the way they do. I couldn’t do that without first feeling like an ‘outsider.’ A Moroccan Muslim living in France, growing up in a Western education system, made me ask questions about myself.”

He felt that same struggle in the longing tunes of a fellow Moroccan Berber now living in a different country.

Knowing that Kamal was a history teacher by trade, I asked him what inspired him to make a film rather than write a book.

His passion was tangible.

“That’s why I made a film. I believe that culture and art are the last bastions that can document and fight against the horrors of racism and intolerance.  For me, film was the most effective means of reaching everyday people.

“That’s why there are barely any ‘specialists’ in my film. It’s populist, but intentionally so. Everything was carefully thought out—with my camera man, with my editor…” 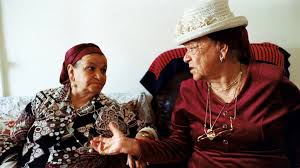 Scene from Tinghir-Jerusalem: Echoes from the Mellah.

A filmmaker must make many difficult decisions, he went on—from choosing what characters to include, how to tell which stories. One aspect that was not difficult for him, though, was the film’s ending, despite the fact that his producers voiced concern that it was too melancholy a scene: With the sun setting on her balcony in Jerusalem, the elderly Aisha—who still speaks Moroccan Arabic to her kids—shrugs and murmurs that you can never forget where you are from.

“That’s the truth for everyone, everywhere,” explains Kamal. It had to be the final scene.