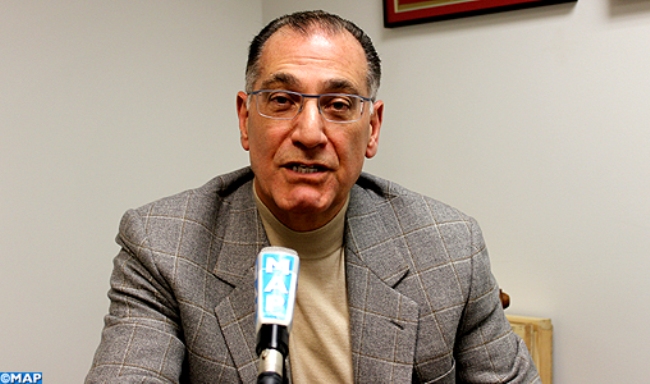 * Rabat-Washington axis has reached a new level after King Mohammed VI’s visit to the US last Novermber. *

Maghreb Arab Press/MAP (Washington, DC, July 18, 2014) —Moroccan-US relations today are “very strong” thanks to the vision and the common will of King Mohammed VI and President Barack Obama, said Edward Gabriel, former US Ambassador to Morocco, stressing that the Rabat-Washington axis has reached a new level after the King’s recent visit to the United States of America.

During the summit that brought together the King and President Obama, in November 2013 at the White House, the two leaders voiced shared viewpoints on a number of strategic issues, notably human rights promotion, economic reforms and priorities of sustainable development in Africa, as well as the Sahara issue, Gabriel told MAP.

Concerning development in Africa, the former US diplomat highlighted the Sovereign’s “impressive” and “forward-looking” vision for establishing sustainable and solidarity-based win-win partnerships with African countries, noting that the US-Africa Leaders Summit, which will be held in Washington early August, is in line with this vision, particularly in the areas of agriculture and food security.

This shared view between Rabat and Washington is backed by a free-trade agreement between the two countries, enforced in 2006, the only one of its kind between the US and an African country, Gabriel said, which underscores the unique role of Morocco in Africa, not only through triangular cooperation with the US, but also as an economic and financial hub.

Another area where Morocco has made substantial progress is human rights, Gabriel noted, recalling that the UN High Commissioner for Human Rights Navi Pillay said, during a recent visit to Morocco, that the Kingdom “is in the midst of an important transition and sets high standards thanks to its Constitution and laws.”