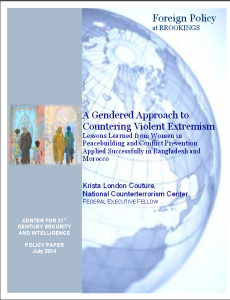 I have just finished reading “A Gendered Approach to Countering Violent Extremism – Lessons Learned from Women in Peacebuilding and Conflict Prevention Applied Successfully in Bangladesh and Morocco.” It was written by Krista London Couture of the National Counterterrorism Center and released by the Center for 21st Century Security and Intelligence at Brookings. Countering Violent Extremism (CVE) is the latest acronym to join the list of references to conflict between state and non-state actors and the environments in which they persist.

The assumption of the study is that “an increase in women empowerment and gender equality has a positive effect on countering extremism.” She gathered data on 16 indicators to identify any linkages between women’s role in a society and its ability to counter extremism.  Ms. Couture claims that “violent extremism is most effectively countered through increased education, better critical thinking, and enhanced opportunities” for women and sets out to prove it in her study. Ms. Couture chose Bangladesh and Morocco because of “their direct and indirect emphasis on women empowerment to fight terrorism and its perceived factors that drive recruitment and radicalization to violence.” In Morocco, she focuses on two programs – the Moudawana, the reform of the family law code in 2004; and the mourchidates program in which women are trained similarly to imams (prayer leaders) to act as community social workers and advisors to families.

Her research “focuses on identifying and assessing the ways in which women can and do commendably serve in the prevention role [not that of enabler or participant in terrorism or counterterrorism].” According to her account, “Research and policies indicate that female empowerment and gender equality indicators continue to be valuable gauges in peacebuilding and conflict prevention.”

When an indicator is a labeled a “gauge” it indicates to me that there may not be a causal link on which to build sustainable strategies. While the relationship may be important, even vital, there are no guarantees that improving the lives of women is more salient than other factors in preventing extremism. So how does her methodology provide more insights into how policy makers can assess prioritizing women’s empowerment over “hard” power solutions to terrorism?

As Fatima Nezza, a Moroccan mourchidate, remarked to Ms. Couture, “If you train a man, you train one person. If you train a woman, you train an entire community.” This remark echoes the observation that in Muslim-majority countries, as in most traditional societies, women are significant anchors to social stability and development. So the author’s 16 “Key Female Empowerment Indicators” cover social, political, economic, and quality of life indicators as a baseline for assessing the status of women in a particular society. When women are valued and supported as credible voices for stability in a country, “Programs where women are active participants moderate the intent and action of extremism at varying stages of radicalization.”

The relationship between CVE and human development has been the subject of many studies since 9/11. It is clear that to Ms. Couture “investing in civilian populations is critical to the success of curbing violent extremism. An essential element of effective CVE programs mandates long-term stability.” In this context, a country’s level and extent of development is a crucial factor in CVE efforts. The Organization for Security and Cooperation in Europe (OSCE), the United Nations, and the US Department of State and Department of Homeland Security have issued reports on the role of women in countering extremism. “Strategists believe that when women are empowered socially, politically, and economically in culturally appropriate and relevant ways, they will become contributing members of society who hold the answers and solutions to complex aspects and issues inherent in CVE,” according to Ms. Couture.

The organization Sisters Against Violent Extremism (SAVE) has written, “Women have a key role to play in funding and implementing new, alternative approaches to ending violent extremism. …their close proximity to potentially vulnerable youth through their roles as the main caretaker in most societies provides them with a unique point of view that can lead to vital insights into how to steer youth away from violence.”

Three factors cited in the paper that influence the impact of Morocco’s CVE strategy are improvements in development indicators for women, their empowerment as a result of the Moudawana, and the targeted efforts of the mourchidates. Ms. Couture points to King Mohammed VI’s continuing reforms, the pace of social liberalization, and its effective counterterrorism regime as elements that set Morocco apart from other countries in the region. Morocco’s moderate form of Islam is also a crucial factor, and she notes, “The Moroccan Government initiated a program of countering extremist views and interpretations of Islam by reaching the wider population with moderate Islamic narratives.”

She describes the mourchidates program in great detail and praises their “optimism and tireless efforts. By educating women and mothers, providing a safe and productive outlet and activity for youths, and providing positive alternatives and choices for prison inmates, female mourchidates are changing the tide of terrorism by blunting potential catalysts.” She recognizes that it will “take a generation of teaching moderate Islam and tolerance through education and communication within a community” to change radical views of Islam, and Morocco has made that commitment. Holistically, “Providing an education, fulfilling basic needs, and affording opportunities to women are what Morocco has deemed necessary to counter violent extremism effectively.” 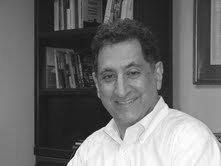 Jean AbiNader is Executive Director of the Moroccan American Center for Trade and Investment.

Ms. Couture concludes her analysis by linking the CVE role of women to the notion of “smart” power promoted by Professor Joseph Nye as bridging the gap between soft and hard power. She believes that “women, who typically invest more in their families, can be the best defense against ignorance, intolerance, and a lack of opportunities.”

Morocco has made its CVE strategy clear: promoting economic and human development, encouraging greater equity and political space, and supporting greater understanding and appreciation of the moderate principles of Islam are integrated into a cohesive program to advance stability and security in the country and the region. While more study needs to be done across a broader population, results to date indicate that Morocco has made a “smart” choice in its CVE strategy and the primary role of women in that regard.