Yet another big-budget Hollywood production heads to Morocco for shooting, according to Batman News: 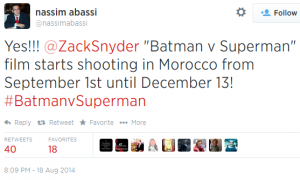 After spending all summer in Detroit, the Batman v Superman: Dawn of Justice crew is heading to Morocco, a country in Northern Africa. Morocco was rumored to be a filming location last August, and a Warner Bros. press release this past May confirmed that they’d be heading to Africa, the South Pacific, Michigan and Illinois.

Today’s news comes from Nassim Abassi, a film producer/director based in Morocco…[Full Article]