Magharebia, by Siham Ali (Rabat, Morocco, August 27, 2014) —A civil council for youth organizations will soon be set up in Morocco.

The project aims to will secure the place of young people in the process of ensuring good governance and participative democracy, according to organizers.

A two-day launch meeting involving dozens of associations under the theme “one voice” wrapped up in Rabat on August 24th.

“This mechanism will be an opportunity for self-expression, meetings, exchanges of views, proposals and exerting influence to protect the place of young people in the achievement of good governance and participative democracy,” explained Kristina Berge of the Friedrich Ebert Foundation (FES), which created the project with the Youth for Youth Association.

According to Imad Akka, who chairs the association’s national bureau, the council will be independent of the state but will make suggestions to the government on youth-related socio-economic issues, particularly employment, education, health and transport. 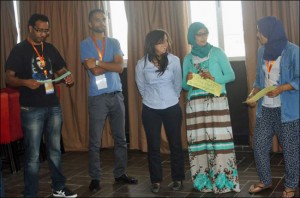 Youth groups in Morocco are coming together to give a voice to young people looking to participate in government. Photo: Magharebia/Siham Ali

“The idea is that associations working in the youth field will be able to have an impact on public policy,” he told Magharebia.

“Up to now, no clear policy has been worked out concerning young people, except for the integrated youth strategy adopted by the government council last April, which will only start to be implemented from 2015,” Akka added.

According to sociologist Fatima Talaj, the new council will allow ideas on youth issues to be brought out into the public arena. She said that associations were very active, particularly at the regional level, but they do not work as a network, which would really make their action count.

Networking is a key element of achieving objectives regarding the various issues that worry young people, Talaj said.

“The civil council will be a real force for bringing forward proposals concerning various issues, such as youth employment. Today, the unemployment rate is worrying, particularly among the top ranks of young graduates. If civil society can be mobilized, then that could help to deal with this problem with a range of innovative ideas. Who better than young people to convince young people to sign up to continuing education and self-employment initiatives?” she asked.

Among young people, many stressed that the initiative would enable young people to talk with complete freedom about their aspirations and expectations.

Khalid Brahimi, 20, a student, said the council would encourage young people to engage in associative action and take charge of their own destinies.

“At the moment, actions taken by associations have no effect on public policy, because the work of civil society is too fragmented,” he said.

“But with this future framework, we’re expecting the impact of association networking to be perceptible in government strategies. In this way, more and more young people will see associative action as credible,” he said.