The New Yorker takes an in-depth look at Gnawa music shows, and their roots in Morocco. The music has drawn interest from famous musicians for years, and in 1998 the Moroccan government began investing to preserve and promote Gnawa, launching a festival in the city of Essaouira:

A dancer whips her hair and lifts and drops her chest as the thwacking bass sound of the sintir fills the air. There are cries of “Ifriqiya!” and “Kandisha!” The musicians call out the names of different saints and spirits  and ask for healing as a soprano sax sounds over the vocals. The dancer lights two sticks on fire and begins passing the flames over her bare torso. The metal castanets beat faster, the dancer’s hennaed arms point upward, and she begins to spin and spin, the flames swirling around her head. The percussion stops—she drops to her knees, throws her head back, and pushes a flaming stick deep into her throat, extinguishing the fire with her lips. The restaurant crowd cheers loudly. The dancer walks “offstage,” and the waiters bring platters of food to the customers. 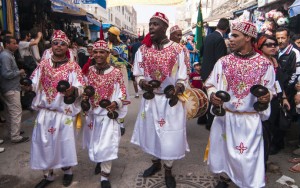 These kinds of Gnawa music shows can now be seen regularly in New York City, if not always with the fire-eating—in Times Square, at music spots in Harlem, Latin clubs in Queens, impromptu jam sessions in Central Park. The Gnawa are a Sufi order in Morocco who identify with the descendants of formerly enslaved West Africans. Their music is believed to heal people possessed by jinn, or spirits. The rise of this music, which began, in the nineteen-fifties, as a marginalized Sufi practice but has become arguably the most popular music emerging from the region today, is a question that nettles scholars and ordinary North Africans alike: How did Gnawa music become our music? Of the myriad Sufi orders that use faith healing, and of the countless North African genres known for polyrhythmic syncopation, why has this one grabbed Western listeners?

One of the first Americans to be captivated by Gnawa music was the Jazz Age poet Claude McKay, who witnessed a healing ceremony in Casablanca and wrote movingly about how the rituals of these “Guinea sorcerers” reminded him of a similar ceremony practiced by peasants in his native Jamaica. McKay had lived in the port city of Marseilles, among people from all corners of the French empire—what he called a “gang of black and brown humanity”—and he saw how the French drew distinctions between African-Americans on the one hand and West Africans and North Africans from the colonies on the other. It was in Marseilles that he was inspired to write his novel “Banjo,” a classic of New Negro literature, which envisioned a pan-African world community that included the Senegalese dockers and Algerian longshoremen whom he had encountered…[Full Story]