The Daily Mail describes Tom Cruise’s working visit to Morocco for the upcoming Mission: Impossible film. This is only the latest production to film in Morocco, which has been a major location for movies and television, recently including Game of Thrones, Inception, and Captain Phillips. 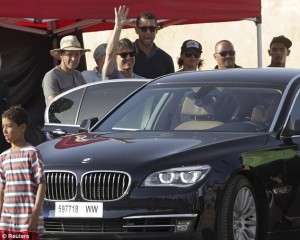 Tom Cruise was given a warm reception as he arrived to the set of Mission: Impossible 5 for filming in Rabat, Morocco. Photo: Reuters

He’s an action hero reprising one of his most successful roles in the upcoming Mission: Impossible 5.

So it’s no wonder Tom Cruise was given a warm reception as he arrived for filming in Rabat, Morocco on Saturday.

The 52-year-old actor waved jovially from the backseat of a glossy BMW, continuing to acknowledge his fans as he disembarked from the vehicle…[Full Story]