Magharebia reports on the latest from ISIL, which is reportedly looking to branch out into North Africa by reaching out to waivering al-Qaeda factions: 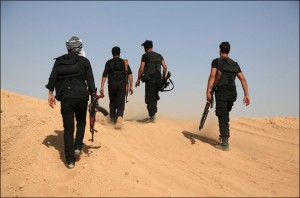 Syrian rebels on July 1, 2013 patrol an area on the outskirts of the Islamist stronghold of Raqqa. Photo: AFP/Mezar Metar

An unknown Algerian terrorist group on Saturday (September 13th) announced its split from al-Qaeda in the Islamic Maghreb (AQIM) and adherence to the Islamic State (ISIS).

Led by Abdelmalek El Gouri (aka Khaled Abou Souleiman), the armed band is made up of members of dormant AQIM cells in central Algeria.

While there was no official reaction to the news, analysts remain cautious as to the veracity of the statement and the reasons underlying such an announcement.

The AQIM split came just a few days after the press revealed information about ISIS plans to establish itself on the south-eastern Algerian border with Libya.

“We know that influential figures in the organization who want to follow Abu Bakr al-Baghdadi would rather wait before declaring their position, because they know that would weaken the structure,” an Algerian officer said on condition of anonymity.

While AQIM leader Abdelmalek Droukdel has refused to recognise the Islamic State, preferring to renew his allegiance to al-Qaeda, other influential figures within his organization appear to change sides.

This summer, one important figure, Abou Abdallah Othmane el-Acimi, officially rallied to the Islamic State cause.

“Very well-informed sources have indicated that we shall witness an internal war within al-Qaeda in the Islamic Maghreb… Our sources have not ruled out the physical liquidation of those who have renewed their loyalty to Ayman al-Zawahiri and could hamper the emergence of ISIS in North Africa,” L’Expression claimed.

In another twist to this evolving story, the Maghreb and Yemeni branches of al-Qaeda released a statement on Tuesday, in which they threatened the anti-ISIS coalition, opposing all armed action against the terrorist movement.

The call was chiefly aimed at armed groups active in Iraq and Syria, asking them not to fight the Islamic State.

According to some experts, this late appeal from al-Qaeda was a final attempt on its part to save face after this new terrorist movement stole the limelight. It is a tactical position intended to put a halt to the exodus from terrorist groups affiliated to al-Qaeda, specialists said.

Regarding the ISIS threat, Algerian Foreign Minister Ramtane Lamamra said on Monday that “ISIS has given itself a name that it does not deserve, and Islam is innocent of such ignoble behavior,” indicating that Algeria would co-operate with other Arab countries in fighting terrorism…[Full Story]