A new organization, The Union of Young African MPs (UJPA), is being launched in Rabat to provide a platform for exchanging ideas and best practices for young government leaders in Africa: 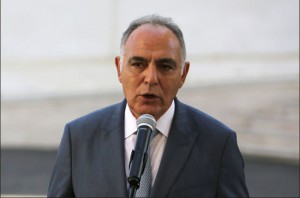 Young people in fifty African countries will soon have a voice, thanks to a first-of-its kind representative body that just made its debut in Rabat.

The Union of Young African MPs (UJPA) is a platform for an exchange of views and debate among Africa’s newest political leaders. It aims to boost co-operation between young people on key issues and improve their access to political decision-making.

“The dream has become a reality,” said the union’s first president, young Moroccan MP Mehdi Bensaid. He and the new body’s other leaders were elected at the Rabat launch event, held Friday (September 12th) in the presence of dozens of African lawmakers.

The UJPA will work on problems facing the continent, Bensaid said, particularly those of concern to young people, such as unemployment and poverty.

Moroccan Foreign Minister Salaheddine Mezouar described the creation of the union as an “historic moment”.

He called on the young African parliamentarians to work on ways to boost economic development and confront security challenges.

The fight against terrorism should also be taken up by the young MPs, Moroccan Chamber of Representatives Vice-President Chafik Rachadi suggested.

The new body was welcomed by a number of political figures, who said it would have an important job to perform.

According to Socialist Union of Popular Forces (USFP) MP Abdelouahed Radi, the UJPA must encourage young people to become involved in democracy, “because that is the key to development”.

“We must seek out the means to change mind-sets so that young people can feel involved,” he added. “Up to now, although they represent 20% of the total population, young people have remained on the periphery of political action.”

“Amongst other things, we need to ensure that citizenship education is improved, and establish laws to guarantee young people are elected by creating a quota on political party lists,” the MP said.

Radi added: “The objective is to encourage young people’s access to the decision-making process and to make them believe in politics.”

Sixty-five per cent of the African population is under age 35, he noted, and yet less than 2% of MPs at the international level are under 30, and only 10% are between 30 and 40 years of age.

He restated the importance of the new body: “Armed with the necessary tools and knowledge, a solid worldwide network of young MPs would be able to lead a campaign of action to promote sustainable development around the world.”…[Full Story]