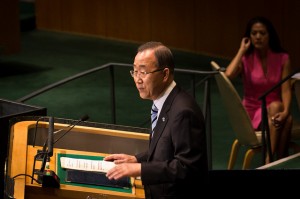 UN Secretary General Ban Ki-moon has praised the initiatives of HM King Mohammed VI in favor of peace, stability and harmony in several African countries, particularly in the Sahel.

“Spiritual and religious leaders have a key role to play in promoting harmony between communities in the Sahel,” the UN Chief said in an interview with MAP, praising “in particular the decision of HM King Mohammed VI to respond positively to the request of the Islamic Council in Nigeria.”

HM King Mohammed VI, Commander of the Faithful, has agreed to a request by the Nigerian Islamic Council and Iftaa Authority for training Nigerian imams in Morocco.

In the Sahel, Ban Ki-moon also called for a “regional and global commitment” to “get (the countries of this region) out of the cycle of chronic crises” and hailed Morocco’s initiatives in this respect.

Ban Ki-Moon praised the initiatives and efforts made by countries like Morocco, citing in this regard, “the Rabat meeting to promote transnational cooperation”.

“I’d like to reiterate my concern about the attacks against civilians and I count on the professionalism, integrity and commitment of Moroccan troops to achieve stability in the country, necessary to put the Central African Republic on the way to sustainable development.”

Morocco is also one of the first countries to have deployed troops in the United Nations Multidimensional Integrated Stabilization Mission in the Central African Republic (MINUSCA), he said.

The UN Chief also expressed his “recognition” to Morocco, the 15th largest contributor to UN peacekeeping operations, for its “commitment with us”, from the Democratic Republic of Congo to Côte d’Ivoire.

Regarding Ebola outbreak, Ban Ki-moon praised “the approach of Royal Air Morocco and the Moroccan authorities” which have decided to maintain their flights to the epidemic-affected countries.

Royal Air Maroc has decided to maintain its flights to all countries affected by the epidemic of Ebola: Guinea, Liberia and Sierra Leone, in a “in a gesture of responsible solidarity”…[Original Story, Registration Required]