A photographer describes his experience of photography and life in Morocco: 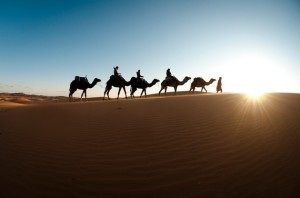 In Morocco, I met the woman I eventually married. Sometimes I blame it on the light. No, that’s not correct. Sometimes I credit the light for having shown — er, shone — her to me right.

We were part of a muster of youth activists meeting in Morocco, in a desert (and nearly deserted) village outside of Ouarzazate, the notable but small city on the open plateau just south of the High Atlas Mountains. To reach and later return from the distant village, we spent a full day hiking across the sun-blanched highlands, donkeys weighed down with our backpacks, the landscape broken by surprising “ruins” from the film sets of Kundun. Or was it The Mummy?

Once installed in our rudimentary adobe but hospitable homestays, we circled up during the days under or near a traditional, low-hanging Berber tent, depending on the strength of the late-autumn sun; at night we huddled together for warmth around broad platters heaped with homemade bread and steaming, aromatic Moroccan cuisine like couscous, pastilla or tajine…[Full Story]