Morocco’s sectoral strategies continue to make waves, this time with the Financial Times taking notice of the growing automotive sector and its effect on growth: 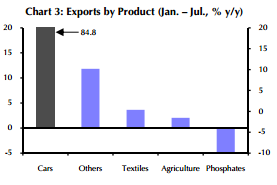 Morocco’s burgeoning automobile sector is driving the industrialization of an economy still heavily dependent on agriculture. The country’s auto sector will help push GDP growth up 4.5 to 5 per cent in 2015-2016, from 2.5 per cent in 2014, predicted Capital Economics in a note, making Morocco “North Africa’s best performing economy over the coming years”.

Falling output in agriculture was holding back overall growth. New data showed that Morocco’s economy grew by 2.3 per cent year-on-year in the second quarter of 2014, a bit better than the 1.7 per cent recorded in the first quarter, “but it is still sluggish by past standards”, said Capital Economics.

Falling agricultural output was also masking gains made elsewhere in the economy. Taking agriculture out of the picture, the economy had expanded at its fastest rate since late 2012 in 2014’s second quarter. As well as cars, tourism is also booming as Morocco lures tourists who might have traveled to Egypt and Tunisia were it not for security concerns. In recent years, Morocco has sought to exploit its proximity to Europe and relatively low labor costs by building a more diverse, export-driven economy…[Full Story]