Another photojournalist falls for Morocco’s charms – this one particularly for the unique doors that adorn homes in Rabat: 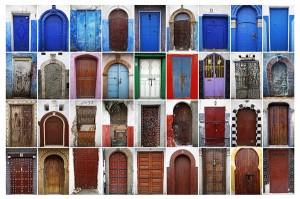 A combination photo shows some of colourful doors in Rabat’s old parts Medina and Kasbah of the Oudayas. Photo: REUTERS/Damir Sagolj

Behind heavy, ornate doors on the Rue de Farj, an invisible pressure-cooker whistles. Next comes the smell of food that carries me back to childhood. Two cheerful voices can be heard, both female: one is patronizing, the younger almost singing. Over the thick stone wall I can see a mother-in-law teaching a newlywed girl the secrets of her cooking.

Over the next two hours of a cool Sunday morning, I stood before and photographed 55 similar and equally mesmerizing doors. By noon, I was in love with Rabat’s Medina.

UNESCO made Rabat a World Heritage Site two years ago. The media and tour operators call it a “must-see destination.” But it seems the tourist hordes have yet to find out. While tourists are getting squeezed and grilled in the madness of Marrakech and Fez, the old part of Rabat – its beautiful Medina and Kasbah of the Udayas – remain an almost unspoiled oasis of calm. Smaller and more compact, its labyrinths of streets, passages and dead ends are a treasure trove of shapes and colors, of moments begging to be photographed…[Full Story]