Yesterday, Moroccan Foreign Minister Salaheddine Mezouar announced the country’s intent to send Moroccan soldiers to the United Arab Emirates (UAE) to support the country in its fight against terrorism and its efforts to preserve regional peace and stability. Morocco’s contribution will include operational military elements and intelligence sharing, though the exact details of the deployment have not yet been released. And though the announcement did not include any mention of the threat on most people’s minds at present – the Islamic State in Iraq and Syria (ISIS) – there is little doubt that the terrorist group is among the targets.

It is worth underscoring, as the announcement makes clear, that Morocco’s counterterrorism efforts are much broader than ISIS and extend from the Sahel to the Gulf to include countering AQIM and MUJAO to name just a couple. Toward that end, Minister Mezaour added in an interview following the announcement that “Morocco is ready to come to the military aid of every Arab or African country whose security and sovereignty is threatened. Every country that makes the request will be supported.” 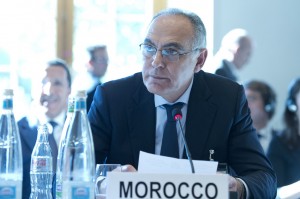 Morocco is already engaged in several bilateral and multilateral counterterrorism partnerships and is working with its neighbors and allies on efforts to bolster intelligence -sharing and border security, as well as to combat terrorist financing and foreign fighter flows. Just as importantly, it is working to combat violent extremism through the promotion of moderate Islam throughout the Maghreb, Sahel, and West Africa. Its program to train imams has already begun and is set to train imams from Mali, Libya, Tunisia, Côte d’Ivoire, Gabon, Guinea, the Maldives, and Nigeria.

More to come on exactly what this announcement will mean for Morocco’s regional counterterrorism and countering violent extremism efforts, but further cooperation from the Maghreb to the Gulf is unquestionably a good thing – and yet another example of Morocco’s importance as an ally to the US and its neighbors in the region.