Vice President Joseph Biden met with King Mohammed VI of Morocco today on his visit for the Global Entrepreneurship Summit: 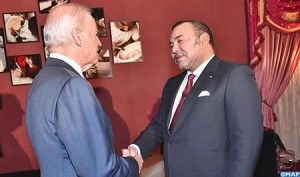 HM King Mohammed VI received, Wednesday at the Royal Palace in Fez, US Vice-President Joseph Biden on a visit to Morocco to take part in the 5th Global Entrepreneurship Summit, The King’s Office said in a statement.

The holding in Marrakech of this Summit was decided by HM the King and US President Barack Obama during the Sovereign’s visit to Washington in November 2013, the aim being to set innovation, an essential source of competitiveness, as a top priority of this Initiative and encourage the establishment of a strategy for inclusive growth, the statement added.

It is also part of the willingness of both Heads of State to develop a strategic triangular cooperation in Africa, particularly in the fields of access to energy and food security.

The talks between HM the King and the US Vice President focused on strengthening the strategic partnership between Morocco and the USA, which draws its strength from its longstanding roots, its base of shared values and its adaptation and renewal ability.

HM the King’s recent visit to Washington has opened new prospects for closer cooperation that would meet the shared will for substantial development of bilateral relations and provide efficient answers to the many challenges that threaten regional peace and stability.

The talks also touched on the latest developments of the Moroccan Sahara issue, as well as regional and international issues, particularly the situation in the Sahel and the Middle East, including the Arab-Israeli conflict.

The Royal audience granted to the US Vice-President was attended by US ambassador to Morocco Dwight L. Bush, Assistant Secretary of State for Near Eastern Affairs Anne Patterson, Senior Director for North Africa Eric Pelofsky and Senior Advisor to National Security Advisor Daniel Benaim.

From the Moroccan side, Fouad Ali El Himma, Adviser to HM the King, Salaheddine Mezouar, minister of Foreign Affairs and Cooperation and  Rashad Bouhlal, Morocco’s ambassador to Washington, attended this audience.

On his arrival at the Royal Palace, the US vice-President was invited to the traditional milk and dates ceremony…[Original story, subscription required]