The world of sports often merges into politics – willingly or not, some players, teams, and even countries end up making political statements with their words and actions. Last week, Morocco was the subject of much sports-column debate after its request to postpone the 2015 Africa Cup of Nations ended with it being replaced as the host by Equatorial Guinea. Morocco was concerned about the ongoing Ebola outbreak; though showing early signs of stabilizing, neighboring Mali had just reported cases of the virus, and recent WHO statements anticipate that “the number of cases occurring per week by [December] is going to be somewhere between five and ten thousand.” Hopefully this figure will fall by the January 17th kickoff, but as the date loomed closer it caused alarm for the tournament hosts, concerned about drawing in massive crowds from all around the continent. At the time, there were still a large number of qualifying matches to be played and it was uncertain which countries would end up participating.

The back and forth between Morocco and the Confederation of African Football (CAF) played out in the press for weeks. In the end, neither side was bluffing, and CAF scrambled to find a new host for the tournament. Standard procedure would be to find a well-equipped replacement to make up for the lack of preparation time. Unfortunately, CAN 2013 host South Africa carried out its rumored insistence on not hosting, and the 2008 host Ghana also declined. Tunisia and Egypt also refused to host, the latter citing ‘economic and political reasons’.

By Friday of last week, CAF found its replacement host. Equatorial Guinea, former co-host of the 2012 tournament with Gabon, announced that it would take over the tournament. As hosts, Equatorial Guinea appears to have found a loophole around their previous suspension from the tournament in July “for fielding an ineligible player in a match against Mauritania.” Once the new host was announced, Morocco was banned from participating. 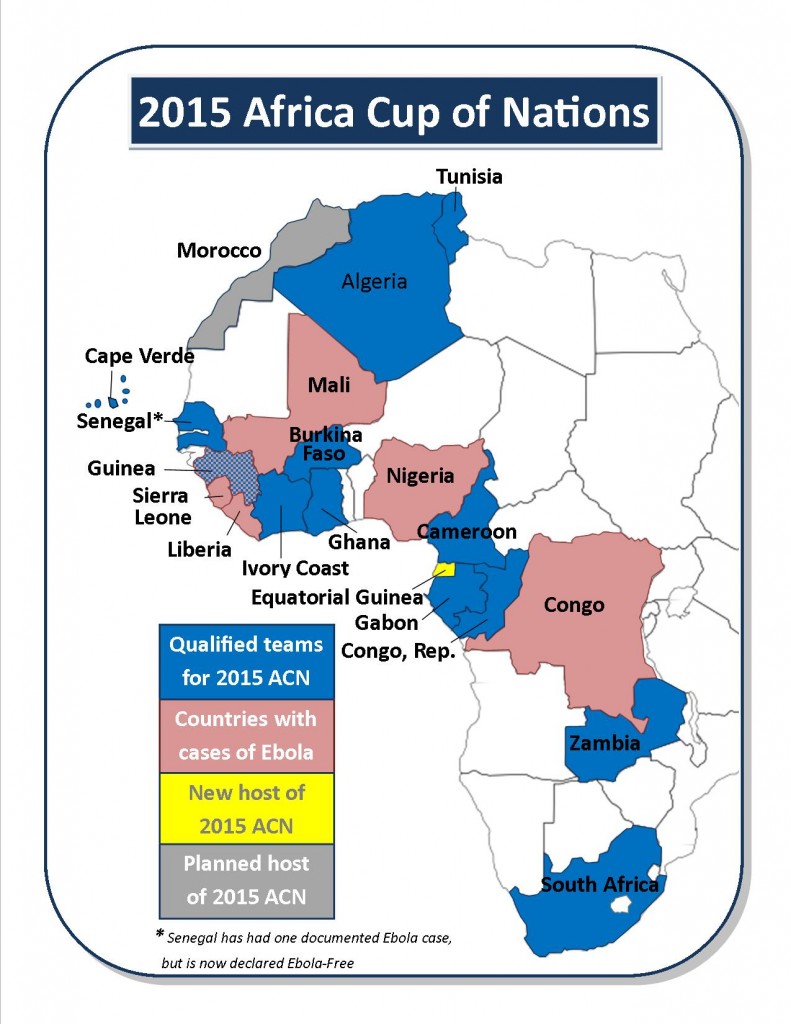 For CAF, the issue with postponement wasn’t a dispute over the threat of Ebola but rather “about severe financial difficulties if the tournament were to be postponed.” CAF had been willing to move the tournament as recently as 2013, simply because it felt that having those two tournaments in the same calendar year was causing poor performance by African teams in the World Cup. Now facing a global health crisis, the same organization refused to consider postponement, openly citing financial issues for the organization as the reason.

Morocco has handled the Ebola crisis with compassion as well as caution. As former US Ambassador to Morocco Edward Gabriel recently wrote: “Morocco has been a constant partner to Ebola-affected countries […] Royal Air Maroc remains one of just two airlines that have continued flights to the three countries most affected by the disease,” providing vital channels for medical supplies and staff. From the perspective of Morocco, hosting a soccer tournament was a much less manageable proposition and a far greater risk. In Morocco’s estimation, the responsible choice would have been to simply postpone the tournament due to a specific, if indefinite, threat.

Again quoting Ambassador Gabriel: “The decision to request a postponement of the African Cup of Nations tournament until the outbreak is under control is yet another sign of the country’s leadership on this issue […] we should commend the country for standing firm even as organizers barred the Moroccan team.”