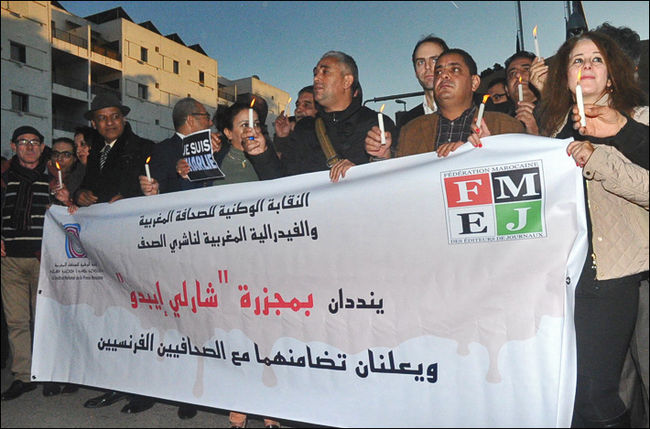 In the face of the attacks against French newspaper Charlie Hebdo on January 7th in Paris, the Moroccan press is not keeping silent.

Just days after 18 people were slaughtered and a dozen injured, a condemnation sit-in was held on Saturday (January 10th) at the French Embassy in Rabat. Unanimously, the participating journalists expressed their rejection of violence.

”Our position is firm and unambiguous with regard to terrorism that aims to destroy the rule of law and violate civil rights and liberties,” the president of National Union of Moroccan Press (SNPM), Abdellah Bekkali, told Magharebia.

SNPM Secretary-General Younes Mujahid said: “This terrorist act is part of a series of threats to freedom of expression and values of democracy.”

The Federation of Moroccan Media (FMM) also stressed the commitment of journalists to upholding the values of freedom.

“This blind violence shows clearly the global nature of terrorism, hence the need for global political will to eradicate this scourge,” the FMM said.

Abdelhamid J’mahri of Al Ittihad Al Ichtiraki explained: “In such a context marked by the breakthrough of fundamentalist ideologies among young people, it is up to all the forces of society to deploy more efforts to fight against all forms of obscurantist fanaticism.”

Journalist Samar Houlabi noted: “The bloody acts against Charlie Hebdo aim at the freedom of expression and creation.”