Member of the European Parliament Gilles Pargneaux says that jihadist infiltration of Tindouf camps adds to urgency that the Sahara issue be settled: 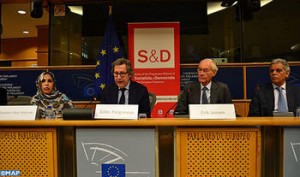 The terrorist threat plaguing the whole region of the Sahel and the infiltration of the Tindouf camps in south-western Algeria by jihadist groups underscores the urgency of settling the Sahara issue, Socialist member of the European Parliament Gilles Pargneaux said on Wednesday in Brussels.

Speaking at a conference in the European Parliament on the Sahara issue, Pargneaux said that the status-quo is “untenable” given the looming risk of Tindouf becoming a stronghold for jihadists.

Pargneaux, who is also Chairman of the Morocco-EU friendship group at the European Parliament, warned of the dangers represented by the proliferation of terrorist groups in the Polisario-run camps of Tindouf, noting that security and intelligence services all consider that the former leader of Al Qaida in the Islamic Maghreb (AQIM) Algerian Mokhtar Belmokhtar used Tindouf as a refuge after leaving Mali in the wake of the French military intervention in January 2013.

It is, therefore, necessary for the EU to intervene in order to prevent the upsurge of terrorist strongholds at the gate of Europe, he said.

The growing instability “pushes us to seek a solution to the Sahara issue and a reconciliation between Algeria and Morocco,” Pargneaux made it clear.

On the impediments to a solution to the Sahara issue, Pargneaux pointed out to the responsibility of Algeria as it remains stubbornly attached to obsolete prisms that prevents it from evolving at the political level.

This embezzlement was the subject of an inquiry by Pargneaux addressed to the EU High Representative for Foreign Affairs and Security Policy Federica Mogherini. “proofs are undeniable” and show large-scale abuse and dysfunctions regarding the distribution of international humanitarian aid sent to Tindouf camps, he deplored.

The Sahara conflict has been imposed on Morocco by Algeria which continues to support and host the Polisario separatist front. The Algerian support for the creation of an artificial state in the Moroccan territory has been hindering efforts aiming at achieving regional economy integration and security cooperation.

To reach a lasting settlement of the regional dispute that has lasted for four decades, Morocco put forward a substantial autonomy initiative that has been welcomed by key international actors as a serious, credible and realistic proposal…[Original Story, Subscription Required]