Another landmark fossil discovery in Morocco, this one called ‘Aegirocassis benmoulae’ after the Moroccan fossil hunter who discovered it, Mohamed Ben Moula: 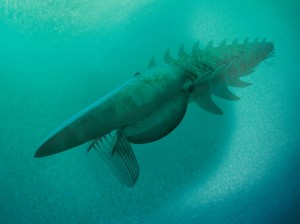 A filter-feeding “lobster” as big as a human took the place of whales 480 million years ago, a new fossil discovery has shown.

The two-metre prehistoric creature, whose remains were unearthed in Morocco, belonged to the family of anomalocaridids, the early ancestors of modern crustaceans, insects and spiders.

But while most of its relatives were shark-like predators with circular mouths and sharp teeth, the new species, named Aegirocassis benmoulae, was a gentle giant.

Like the modern whale, it filtered seawater to trap tiny particles of food, using spine-covered “limbs” on its head. It is thought to be the oldest giant filter-feeder ever discovered.

Dr Allison Daley, of Oxford University, who co-led a team writing in the science journal Nature, said: “This would have been one of the largest animals alive at the time…[Full Story]