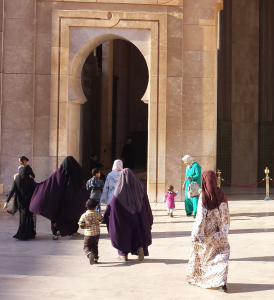 On May 19, the Thompson Reuters Foundation published an article on Casablanca Calling, a British documentary that follows the day-to-day work of women preachers, or morchidates, in Morocco. The program began in 2006, and the hope is that women spiritual leaders can “both encourage a more tolerant Islam and improve the position of girls and women in Moroccan society”:

“The morchidat[es] are a rare experiment in the Muslim world,” the film’s Moroccan associate producer Merieme Addou told the Thomson Reuters Foundation.

“It’s the first time in a Muslim country that a religious role has been given to a woman.”

The article goes on to explain how the morchidates leverage their religious knowledge to effect change. There are now more than 400 morchidates working across Morocco. The morchidates are outspoken on women’s rights, and Addou says the fact that what they say is rooted in religion gives their message legitimacy.