More details and photos from the US-Morocco African Lion military exercises being held in Morocco: 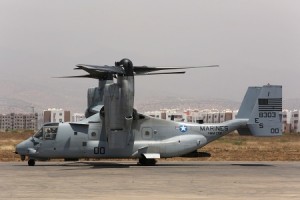 TIFNIT, Morocco – Integration of Royal Moroccan Armed Forces and NATO Allies is the foundation for Exercise African Lion 15, a joint military exercise taking place in the Kingdom of Morocco during the month of May 2015. Training outside the city of Tifnit, Morocco, is exemplary of the tight-knit integration the exercise implements, creating a joint, combined force for stability operations that works and lives together.

The U.S. Marine contingent in Tifnit has Moroccan, Dutch, Belgian and U.S. Army soldiers working key roles within the battalion’s staff, an indication of the operational familiarity between the nations.

“African Lion is the largest exercise on the African continent where the detachment has Belgian, Dutch, U.S. and Moroccan soldiers in close coordination and sharing the techniques and procedures of stability operations,” said Duisters.

This exercise maintains the partnerships and multilateral training environments that Morocco, a key Non-NATO ally, and U.S. Marine Corps Forces Europe and Africa have built over the past iterations of African Lion.

“It’s important to train like this because, when we are on an operation, we always have to work together, and to work together means we need to train together; African Lion is the perfect opportunity,” said Dutch Maj. Frank Peters, acting as the executive officer for the Marine battalion.

“Morocco is the perfect country for this. We learn from them, they learn from us, and that’s important that we do it during African Lion because we don’t get too many opportunities to train in this climate, surroundings and weather; in Holland, you can’t train like this,” said Peters.

Morocco, one of America’s oldest and closest allies in the region, sets the arid stage for more than eight nations to integrate themselves in brigade- and battalion-level training engagements to improve military capabilities between the coalition’s tactics, techniques, and procedures.

“We’ve been friends with the Moroccans since the United States became an independent nation, so we have that long friendship, and it’s a good way to continue to build the relationship,” said Staff Sgt. Kevin G. Morrow, nonlethal weapons instructor, 2nd LEB.

The shoulder-to-shoulder integration creates a bond of familiarity and friendships, something that improves the nations’ capabilities to work together in the case of future contingencies.

“If we just trained together, at the end of the day the Marines would hang out with Marines, the Army with the Army, and the Dutch and the Belgians would hang out together,” said Morrow. “This allows us the opportunity to reach outside our comfort zone and mingle with different nations, learn their culture, learn what their idea of a good time is, their food, and their families.”

Marine Forces Europe and Africa leads the exercise in coordination with the 2nd Marine Expeditionary Brigade, bringing together a joint-task force to integrate the international coalition of Moroccan, U.S., U.K., German, Belgium, Netherlands, Mauritanian, and Senegalese armed forces. The international coalition in Tifnit is just one piece of the exercise that spans from Ben Guerir in the north to port of Agadir and south to the desert training area of Tan Tan.

“If we didn’t live in one area together, I don’t think we’d have the opportunity, not just to be on a professional level with this training engagement, but on a personal level, where we know about each other, our families and can build that tight relationship with them and not just be about business,” Morrow said…[Original Story]