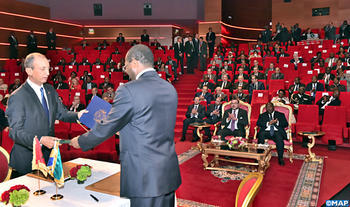 Both integrated policies, which aim at reducing poverty, reflect the commitment of the two heads of State, King Mohammed VI and President Ali Bongo Ondimba, to proote the welfare of their citizens and the sustainable development of their respective territories.

Sharing Morocco’s 10-year INDH expertise confirms the determination of Morocco and Gabon to deepen and broaden their partnership and rely on their own strength to meet the legitimate aspirations of their two brotherly peoples, whom are attached to African-African cooperation.

On this occasion, Interior minister Mohamed Hassad underlined that human development and investment are two strategic large-scale projects for Morocco and Gabon, and that sharing expertise in this area mirrors the solidarity-based, win-win cooperation between the two countries.

Hassad added that, pursuant to the royal and presidential instructions and as part of this cooperation, a Moroccan-Gabonese joint team was mobilized to devise a working plan on human development and investment while taking account of the platform of the two countries’ experiences, namely INDH and SIHG.

He noted that, over the past 10 years, 9.7 million people were impacted by this initiative, including 50% in the rural area, and 38,340 projects were carried out, including 20% related to income-generating activities.

Oyiba underlined that the SIHG will need, for its success, the Moroccan INDH experience through notably the partnership established by the framework agreement of cooperation on human development and investment, inked in December 2014 in Libreville.

The framework agreement concerns training sessions and sharing expertise in the fields of governance, partnership, project monitoring and assessment, and promotion of associations’ fabric, he said.

On this occasion, King Mohammed VI and President Ali Bongo Ondimba chaired the signing ceremony of four partnership agreements. The two first agreements, inked by Mohamed Hassad and Jean-Pierre Oyiba, touch on cooperation in terms of providing health care for kids with autism and down syndrome and setting up hemodialysis medical units.

The third is a memorandum of understanding on handicraft and social and solidarity-based economy, signed by minister of handicraft and social and solidarity-based economy Fatima Merouane and Gabonese minister for trade, SMEs, handicraft and service development Gabriel Tchango, while the fourth is a draft cooperation agreement on vocational training between Morocco’s Office for Vocational Training and Labor Promotion (OFPPT) and the Moroccan agency for international cooperation (AMCI) on the one hand, and Gabon’s ministry of labor, employment and vocational training on the other hand.

This ceremony was attended by the King’s advisors Fouad Ali El Himma and Yasser Zenagui, members of the delegation accompanying the King, members of the Gabonese cabinet and other figures…[original story, subscription required]