The holy month of Ramadan starts today in Morocco. Ramadan, which is timed according to the lunar calendar, commemorates the first revelation of the Quran to Muhammed through a month of prayer, introspection, fasting, and charity. Observed by Muslims worldwide as one of the Five Pillars of Islam, it is marked by different traditions that vary from region to region, particularly when it comes to the iftar, the meal at which Muslims break the fast.

In Morocco, several unique traditions identify the start and end of the day’s fast. An older tradition is that of the naffar or town “crier” who walks down the street playing a special trumpet to wake people up for the suhour, the last meal before sunrise. Though this tradition is dying out in large cities, some towns still mark this tradition with drums or other similar calls. To mark the end of the day’s fast, a cannon ball is fired, followed by the call to prayer. 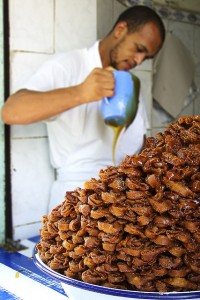 From there, the iftar begins. In Morocco, a country known for its rich culinary heritage, this features a number of specialty foods. Though served year round, they are especially popular during the holy month. Traditionally, the fast is broken with dates, milk, juices, and sweets.  Briouats – phyllo stuffed with a sweet  almond and rose water filling, then fried and dipped in honey, sellou (or sfouf) – a sweet made from wheat, almonds, and cinnamon – and chebbakia – a cookie shaped into a flower, fried and then dipped in honey – feature prominently on the iftar table. Another Moroccan delicacy known throughout the Maghreb that plays a central role in the iftar is harira – a tomato, lentil, and chickpea soup that is sometimes replaced with a barley soup or other milk-based porridge.

After prayers, Moroccans meet again at the table to drink mint tea and eat beghrir and rghaief – pancakes coated with melted butter and honey, to socialize, and just relax.  Dinner is also often served much later in the evening and includes such traditional dishes as tagines, slow-cooked savory stews typically made with meat or fish, vegetables or fruit, and an array of Moroccan spices, and bastillas, a phyllo pie that combines sweet and savory flavors and can be made with meat or fish.

As families and friends gather every evening for thirty days to celebrate, introspect, pray, and give to the needy, Ramadan Kareem to the entire Muslim world.