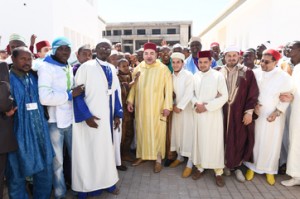 King Mohammed VI’s recent visits to Senegal, Guinea-Bissau, Côte d’Ivoire, and Gabon, along with his numerous training initiatives for imams from the continent, have greatly bolstered Morocco’s relations with its African neighbors, according to a June 24 Carnegie Endowment for International Peace conference entitled, “The Fragile Sahel: Transnational Threats and Sustainable Solutions.”

During the first panel on “Security Challenges in the Sahel,” Anouar Boukhars from the Carnegie Endowment for International Peace and the Fundación para las Relaciones Internacionales y el Diálogo Exterior (FRIDE) discussed Morocco’s efforts to promote a moderate version of Islam in the Sahel. He highlighted that Morocco is training imams as part of a larger geopolitical effort to combat violent extremism. So far, he added, Morocco has managed to deflect extremism and thus remains a leader among African countries.

During the second panel on “Development Challenges in the Sahel,” Clare Castillejo from FRIDE suggested that women’s groups in the Sahel can learn a great deal from Morocco’s success. Women’s organizations in Morocco have created platforms for women’s empowerment that interact in a harmonious way with Islamic ideology, creating a credible and culturally sensitive movement. Civil society groups in the Sahel would do well to follow the Kingdom’s example as they seek greater public and political recognition.

Events like the one hosted by CEIP demonstrate the level of respect that the international community has for Morocco’s initiatives. If the past is any indication of the future, the Kingdom will remain a strong leader in Africa for years to come.