Swiss designers to an Ultimaker 3D printer make Taghazout, Morocco their home to test out the innovative printing machine that turns plastic shreds into marketable objects. As wamda reports: 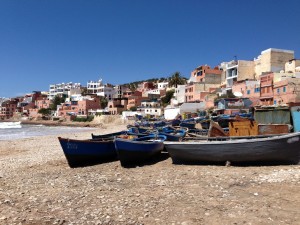 When Gadient and Wyss left Berne, Switzerland, for the Mediterranean shores, they had one goal in mind: to asses the feasibility of plastic waste as a raw material for 3D printed objects.

Gadient, formerly a fashion designer, and Wyss, who worked as a product designer, spent a short stint in France, then two months in Spain, and now they’ve settled in Morocco.

After turning their van into a custom-made bedroom, the couple needed to find the equipment required to 3D print. “Ultimaker [the 3D printer makers] gave us a printer, and in exchange we give them feedback on their machine and content,” explains Gadient. “I think what interested them was that idea of recycling, and mobility. What does it mean if someone doesn’t have a factory, but travels with it?” adds Wyss. [full story]