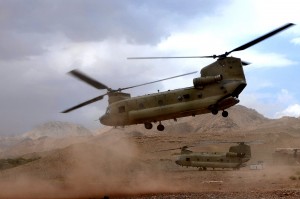 The Royal Moroccan Air Force’s three new refurbished CH-47D Chinook transport helicopters arrived in Morocco on Saturday, after being transported from the United States by sea.

They arrived at the port of Tanger-Med, Tangier, aboard the US registered cargo vessel MV Liberty Pride. They were also unloaded on 15 August.

The first of the three helicopters was reflown in April after a seven month refurbishment by US maintenance, repair and overhaul (MRO) company Columbia Helicopters at its facility at Aurora State Airport in Oregon…[FULL STORY]