On September 4th, 2015, Morocco held historic elections that advanced the process of devolving power to the local and regional levels as mandated by the reformed Constitution of 2011. For the first time, Moroccan voters directly elected representatives to their regional councils; and now both regional and local councils will have greater independence in managing and budgeting their respective affairs.

While elections themselves were a major step in the regionalization process, voter turnout was seen by observers as a crucial indicator of citizen buy-in for both regionalization and the democratization and reform trajectory as a whole for the country. After the votes were tallied, a turnout of 53.67% demonstrated a resoundingly positive response by citizens choosing to engage in a credible process. Morocco was able to avoid the mass boycotts and voter apathy that have stymied polls in other democratizing countries.

This is an exciting result for both Morocco and the region. Morocco is the only country in the region that has even begun the experiment of giving more power to its citizens through decentralization. Recognized as an oasis of stability in a turbulent region, Morocco has consistently demonstrated its commitment to continue pushing towards reform and progress, albeit at its own particular pace. While some uncertainty remains as to how this new distribution of power will look and function moving forward, this process merits further attention as it surely offers lessons for both Morocco’s neighbors and for US policy in the region… 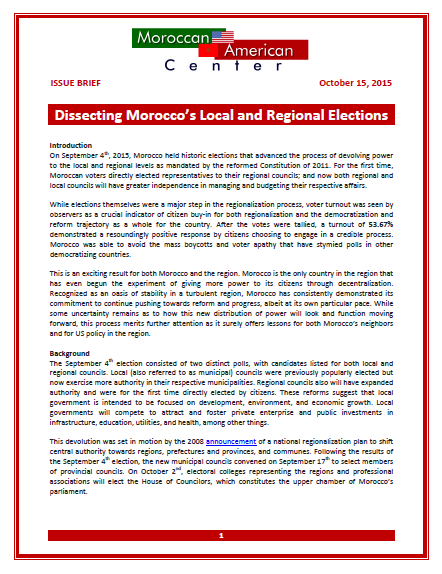