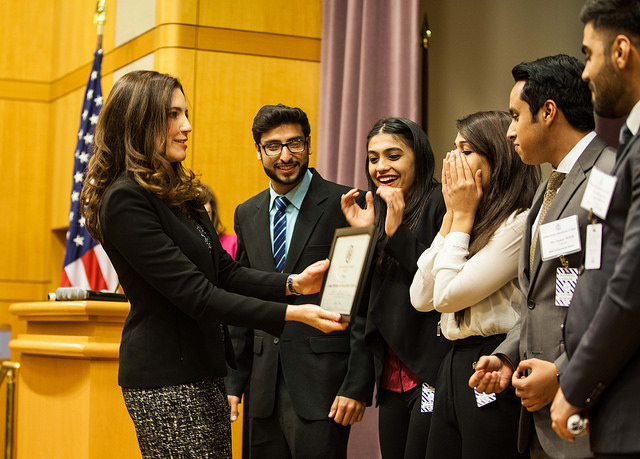 The “Peer 2 Peer (P2P): Challenging Extremism” project, launched in spring 2015, is based on the premise that empowering student “experts” in reaching their peers was a critical strategy in efforts to combat extremist propaganda. The idea was simple – create a competition in which “Teams were tasked with developing campaigns and social media strategies against extremism that were credible, authentic, and believable to their peers and resonated within their communities,” according to the program brochure. Last week we saw the results of the second P2P competition.

Who better to build this program than EdVenture Partners (EVP), which has been developing innovative industry-education partnership programs for more than 25 years? Their programs provide students with hands-on experience in finding solutions to real-world challenges. In fact, it was EVP that developed the “Brand Morocco” competition, which brought together schools in North America and Morocco to design marketing campaigns aimed at US companies to promote key sectors in Morocco.

As the danger of extremists manipulating social media to attract youth and the vulnerable has become a major concern of governments and NGOs, the need for a multifaceted counter-narrative became apparent. EVP, with its network of more than 800 schools, worked with several US government agencies to shape the P2P campaign, and it has been growing exponentially, attracting high visibility corporate partners such as Facebook. This year, teams from 45 universities in 17 different countries participated; the target for next semester is more than 100 universities in up to 40 countries.

Working with their professors, student teams immerse themselves in the project casebook that is full of details on how to proceed, information on the project’s objectives, and the anticipated end product. The teams then undertake research to define and better understand their target market and build a social media strategy to reach out and influence their peers.

Students receive a budget to produce an actual campaign, implement it, and measure the initial results – all within one semester. A key criterion is that the campaign can be duplicated and utilized elsewhere, so sustainability and scalability are critical.

And the Winners Are!

The team from Lahore won first prize on the back of their FATE campaign. FATE is short for “From Apathy to Empathy,” focusing on the dangers of people become inured to violence when it is so overwhelming and part of their daily lives. Using their own country as the baseline, the students outlined the dangers of apathy across several dimensions, including weakening of religious tolerance, lack of awareness of options to counter violence in their communities, and the dehumanization of victims, who are treated as numbers.

The work they undertook was incredibly diverse and demanding: focus groups, media advertising, outreach to local schools and universities in Pakistan and the region, engaging experts, and mobilizing social media. You can check out their Facebook link at https://www.facebook.com/fromapathytoempathy/ for more details and descriptions of their outcomes to date. They also developed several hashtags, including #challengeextremism – which is a virtual poster campaign — and #notjustanumber – aimed at students. An arts component has also been developed along with partnership with NGOs and other universities. With close to a half a million impressions on Facebook, reaching 380,000 people with close to 15,000 likes, they are off to a tremendous start.

The team of cadets from West Point, who came in second, had an innovative approach to reaching out to the target populations – attract them directly through social media using #Let’sTalkJihad. The campaign creates a home where young, restless, and searching youth can find out more about Islam, what’s going on with others in their demographic, and be exposed to scholars and advocates and peers who can relate to them across a range of topics and interests. Their website, http://www.letstalkjihad.com/, guides the viewer through several options for discussion, discovery, and contemplation, giving them resources and contacts to enable them to talk about what’s on their mind, in several languages, for Muslims and non-Muslims alike.

Their presentation was quite polished, with anecdotes about the responses they are getting across the country, from “impressionable, at-risk youth” who access social media and the internet in search of answers. The target populations of Muslims and others who are in the middle — that is, neither totally disengaged nor already committed to the message of militant jihad — have been responding. They are being funneled to the website, which is creating a sense of community for young people to explore, ask, and learn from credible sources. In the few months since the site went active on Facebook, there have been 836,000 content views.

A very different approach was taken by the third-place finishers from Switzerland. They believe that if people are sensitized to the importance of preserving cultural heritage, they can be mobilized to protect endangered sites and artifacts. So their campaign, Faces4Heritage, www.faces4heritage.org, targets the one billion annual transnational tourists through various social media, to influence their perspectives and attract them to support initiatives to build peace through preservation.

The team found a ready ally in UNESCO, and they are partners in promoting protection and conservation of heritage sites. An innovative logo, which is half of an artifact that depicts a face, invites the reader to place their face in the other half of the logo – inspiring the message of “Faces for Heritage.” Pointing out that heritage is a major part of our identity, their goal is to engage travelers, tourism professionals, and heritage leaders to denounce destruction of heritage sites. The campaign is also on Facebook and Twitter and is being supported by tourism associations, museums, public institutions, Wikipedia, cultural events, universities, and NGOs. They have developed an online course that is already heavily subscribed. To date, they have had 680,000 visitors on Facebook for 1.6 million impressions, and 575,000 Tweets to their hashtags.

Tony Sgro, founder of EVP, sees these projects, and the dozens more that were submitted, as significant proof of concept for the P2P program. “The results clearly show that using social media is a powerful tool to mobilize youth everywhere in the world, against extremism. The creativity, imagination, discipline, and passion behind these campaigns indicate how powerful this mobilization can be. Our goal of doubling the number of schools next semester and even more growth after will enable P2P to become a significant non-violent alternative to the extremists’ message of hate.”

Judges for the finalists’ round of the competition were four government officials working in the fields of counterterrorism and public diplomacy, as well as Monika Bickert, Head of Product Policy at Facebook, and Jessica Stern of Boston’ University’s Pardee School of Global Studies. One fun anecdote – most of the finalists from overseas had never been to the US before so they were treated to a White House tour. As they were going through the halls, President Obama and Vice President Biden stopped and said hello. Selfies and smiles all around!