Plan for the Sahara only the Beginning for Empowering All Moroccans 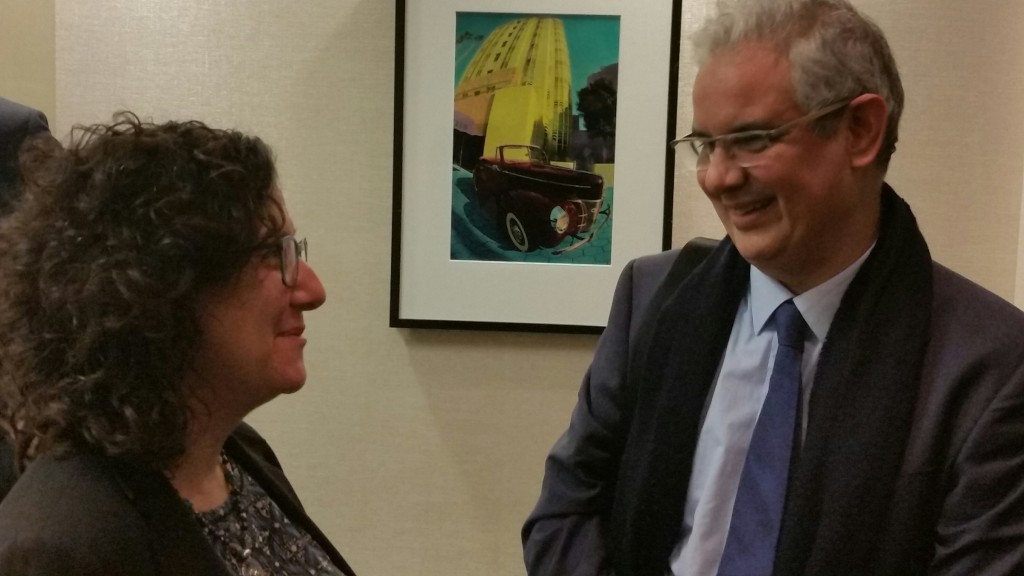 Tamara Wittes, director of the Center for Middle East Policy with Nizar Baraka at the roundtable.

At a recent roundtable discussion in Washington, DC, The Honorable Nizar Baraka, former Minister of Finance and Economy, who serves as president of the Economic, Social, and Environmental Council (CESE) in Morocco, provided his analysis of the regionalization program being rolled out in Morocco, and how this is already changing the political space in the country.

Mr. Baraka began by reviewing the CESE process for developing the first study of “the South” (the Saharan provinces), which included public hearings with testimony from some 1500 people as well as dozens of studies prepared by experts, which resulted in recommendations for extensive restructuring of local government and a robust economic development strategy. He explained that what is being done in the South is the beginning of “advanced regionalization” for all of Morocco.

He believes this is part of the implementation of shared decision-making and devolution of power promised in the 2011 Constitution. Mr. Baraka emphasized that the credibility of regionalization will only become real when citizens participate in local decision-making that affects their daily lives.

For example, the Parliament (Chamber of Deputies) is currently debating bills that give Civil Society the capacity to submit proposals and petitions directly to Parliament.

There is great economic disparity among the regions in Morocco, he explained. For example, 52% of Morocco’s GDP is produced in four regions, while 53% of its doctors practice in two regions. Similarly, the rate of joblessness in the South is twice the national average. Baraka insists that the direct election of the region’s presidents (the highest locally elected officials), and the five-fold increase in budgets for regional development are strong incentives for citizens to be more involved in local affairs.

So the CESE efforts have focused on how the government can create an environment for greater political responsiveness, and part of this campaign is a new economic development model for the region based on public-private partnerships. This includes large-scale investments in diversifying the economy, a new university focused on local needs, particular attention to conservation, and positioning the Sahara as a gateway to sub-Saharan Africa.

The Sahara is well poised for economic growth. Its GDP is 60% higher than the national average, but some 30% of that is generated by government programs. So the strategy going forward is to deeply engage the private sector to increase investments and jobs. One critical target is to diversify the local economy while protecting the environment. The focus is on empowering individuals to more fully participate in the economy; for example, raising the rate of women in the workforce from a woeful 14% to at least the national average of 25%, and doubling the number of employed youth.

Sectors slated for diversification include fishing, aquaculture, value-added farming, renewable energies, downstream phosphate industries, and eco-tourism. Plans have been finalized for a local university focusing on the needs of the region, including professional development of medical personnel, educators, managers, and lawyers; tourism and hospitality; and research and development supporting local industries. Given that the South’s literacy rate is already 20% higher than the national average, targeted efforts to build on their capabilities through focused programs of higher education should reap short and long term benefits, in terms of jobs and meeting future employer needs.

Conserving the environment is also a prime consideration, especially well water, which is overused. Desalination, reuse of gray water, greater efficiency of energy utilization, treatment regulations for well water, a new dam, and a comprehensive campaign to preserve the eco-system in the Bay of Dakhla are the headline items in this effort.

Looking at both the supply side, which pushes the growth of the local economy, and the demand side, which is the pull of market needs, Africa is the obvious market. Building a new expressway from Agadir to Dakhla onwards to Mauritania and Senegal, high speed digital connectivity, expanded port facilities, and the export of solar power along an interconnected grid are all in the plans for the next 10 years. It is anticipated that 75% of the targeted $10 billion of investment will come from national government public-private sector partnerships, while the regional governments will contribute the remaining 25%. The goal of these efforts is to create 120,000 jobs and cut unemployment in half.

Mr. Baraka provided discussed other plans underway, which he believes will create a seismic shift in how citizens see their roles in relation to the government. Empowering proactive, engaged, and contributing citizens is the core mission of advanced regionalization, which will require a different mix of incentives in Morocco’s different regions. The most important impact, according to him, is that the political space in Morocco has changed forever. This is clear in viewing the evolving role of the media and civil society, debates in Parliament over legislative initiatives, and the pressure on political parties to restructure their governance to reflect issues and priorities. More importantly, advanced regionalization will continue this process and move Morocco towards its goal of a new social compact based on engagement and respect.

Tamara Wittes, director of the center for middle east policy with Nizar Baraka at the roundtable.