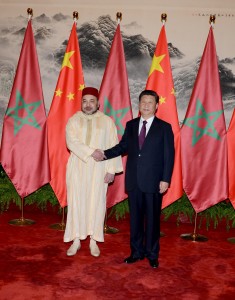 Washington, DC, May 13, 2016 (MACP) — On Thursday during an official visit to Beijing, Morocco’s King Mohammed VI presided over the signing of 15 public-private partnership agreements between Morocco and the People’s Republic of China. The King also announced that, in the interest of improving the two countries’ relationship, Chinese citizens will no longer require a visa to visit Morocco.

The agreements covered a range of areas, from housing development to energy to logistics and shipping and more. They included agreements between:

Over the last two decades, Morocco has taken steps to become a business hub in Africa, investing in infrastructure and sector-specific education, expanding business relationships throughout the continent while courting foreign investment. And the work has paid off. In April, French automaker Renault announced a major new expansion of existing investments in the country, expanding operations alongside other big names like Bombardier and Boeing who also have a presence there.

Earlier this year, Morocco was named among the 50 most innovative economies in the world and one of just two such economies in Africa by the 2016 Bloomberg Innovation Index. The World Bank’s Doing Business 2016 report ranked Morocco first out of 20 MENA countries in terms of “ease of starting a business” and placed it sixth overall in the region for “ease of doing business.” In 2014, the Wall Street Journal’s  Frontiers/FSG Frontier Markets Sentiment Index reported that Morocco is among the top ten frontier markets—and the only one in the Maghreb—most favored by foreign corporations. KPMG International and Oxford Economics’ 2015 Change Readiness Index (CRI) ranked Morocco as the most “change-ready” country in the Maghreb, with particularly positive results in the category of “enterprise capability.”

“Thanks to forward thinking reforms under King Mohammed VI, Morocco today boasts a business-friendly, innovative economy, skilled workforce, political stability, and  ever-strengthening ties in Africa,” said former US Ambassador to Morocco Edward Gabriel. “All of this makes Morocco the ideal partner for world powers like China seeking to expand commercial and security relationships in the Maghreb region.”