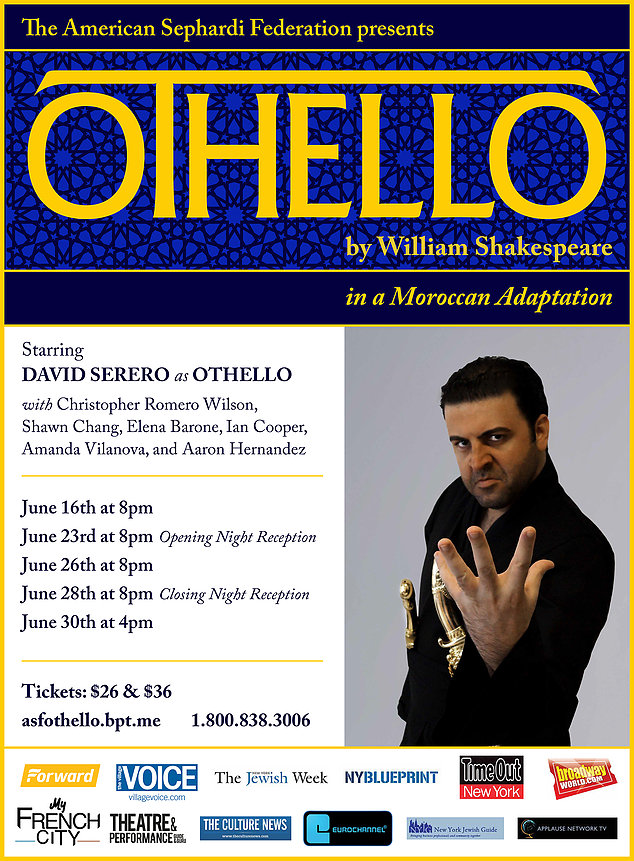 This week, the American Sephardi Federation (ASF) wraps up its Moroccan adaptation of Shakespeare’s “Othello.” Performed at the Center for Jewish History in New York City, the production is the third in a series that ASF has adapted since January, incorporating Sephardic music and Moroccan costumes into dramatic classics.

David Serero, who plays the titular role in the Othello production, explained in an article in The Forward:

“This production is unique, because for the first time we will return ‘Othello’ to its roots, back to Morocco. The production will feature Moroccan music. I want to explore the Moroccan aspect of the play, returning it to Shakespeare’s original idea of using the inspiration of Abd el-Ouahed ben Messaoud, who was the ambassador of the Moroccan / English alliance in 1600. Shakespeare was very intrigued by this man, his clothes, costumes, traditions, looks and his darkness, which I want to explore.

The role is in fact very personal for Serera, who is of Moroccan origins. He writes:

I hope to deliver an interpretation of Othello that is different, and bring a new understanding to this complex character. I intend for my interpretation of “Othello” to be personal, with roots in my own heritage : my dad was born in Morocco and instructed me in the ways of Jewish Moroccan culture. It is a little-known fact that numerous songs in the Arabic song repertoire are Judeo Arabic songs by such composers as Salim Hallali. And I will sing one of those songs as Othello.

I’m deeply honored and proud to present Sephardic culture in such a classic work by the greatest writer ever : William Shakespeare. I would have never imagined singing those Judeo-Arabic songs (which I constantly listened during my childhood in Paris) in New York where the Ashkenazi & Yiddish culture is more present. That alone will make me very emotional on stage. That, combined with the fact that I will be playing one of the greatest character ever written Othello, in the the greatest city in the world New York. To use Shakespeare in order to showcase that Sephardic culture is a dream come true. Even though times are difficult for Jews in the Arab world, we must never forget that culture of Jews and Arabs at the height of their relationship, especially in Morocco. Where the King Mohammed V refused to deliver his Jews to Hitler and replied “If you take my Jews, you’ll have to take me first.” By playing Othello, I am also paying a tribute to this culture and time. [FULL STORY]