As the world spotlight is on the Rio Olympics, here is a look at some of the highlights of Morocco’s history at the Summer Olympics.

Morocco first participated in the Olympic Games in 1960 in Rome, sending athletes to compete in track and field, boxing, cycling, fencing, gymnastics, pentathlon, sailing, shooting, weightlifting, and Greco-Roman wrestling. Morocco has participated in every summer games since then except two. In 1976, the Kingdom joined the African boycott of the Montreal games, when 25 African countries withdrew in protest of the International Olympic Committee’s decision to allow New Zealand’s to participate – the All Blacks rugby team had recently gone on tour in South Africa, defying an anti-apartheid ban on sporting contact there. In 1980, the Kingdom joined the American-led boycott of the Moscow games in response to the Soviet invasion of Afghanistan.

Though the number of sports the country participated in dropped over the ensuing years, Morocco added soccer in 1964, basketball in 1968, and women’s soccer in 1972. Over the years, Moroccan athletes won 22 medals, 18 in track and field and three in boxing. The country’s first gold came at the 1984 games in Los Angeles, when Nawal el-Moutawakel and Said Aouita both won gold in track and field. 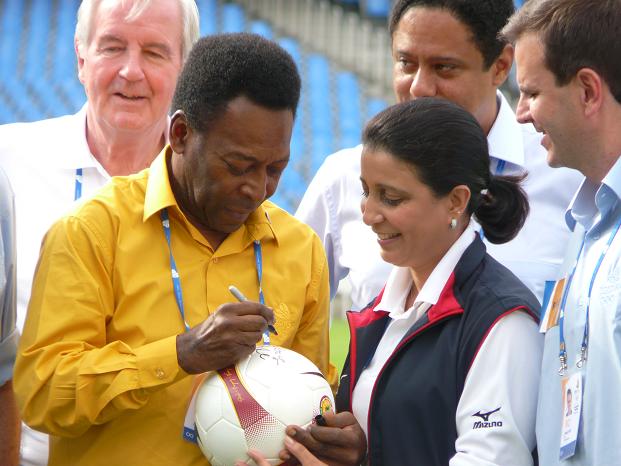 Nawal el-Moutawakel’s victory in the inaugural women’s 400 meters hurdles was especially historic; besides being the first Moroccan to win a gold medal, el-Moutawakel was also the first Muslim woman to become an Olympic champion. Recounting her victory to the Financial Times, el-Moutawekl recalled that King Hassan II called her right after the victory: “He said: ‘I am so proud of you. The entire country is going wild. This victory has made us all so happy and proud of you.’ To celebrate, he declared that every girl born that day should be called Nawal.” A pioneer for both Muslim and Moroccan women in sport, el-Moutawakel’s success certainly inspired future generations of Muslim women – athletes or not.

By the time of the 1996 games in Atlanta, the Moroccan delegation had expanded once again, with 33 athletes participating in five sports.  And at the 2000 Olympics in Sydney, the number of athletes reached 54.  The Sydney games are remembered in Morocco for the hopes placed in Hicham El Guerrouj – one of Morocco’s most famous runners, now known as “The King of the Mile.” Though El Guerrouj finished in a disappointing second place in the 1500 meters, he went on to win gold in both the 1500 meters and the 5000 meters at the 2004 Olympics in Athens, becoming the first man in 80 years to win both titles in the same Olympics. El Guerrouj is to this day considered by many to be the greatest middle distance runner of all time and is the current holder of the outdoor 1500 meters, mile, and 2000 meters world records.

For a complete history of Morocco’s performance at the games, check out the country’s National Olympic Committee. And for an overview of Morocco’s participation in Rio, where it is represented by over 40 athletes in 11 disciplines ranging from track and field and boxing to equestrian and golfing, check out Google’s Olympics section.