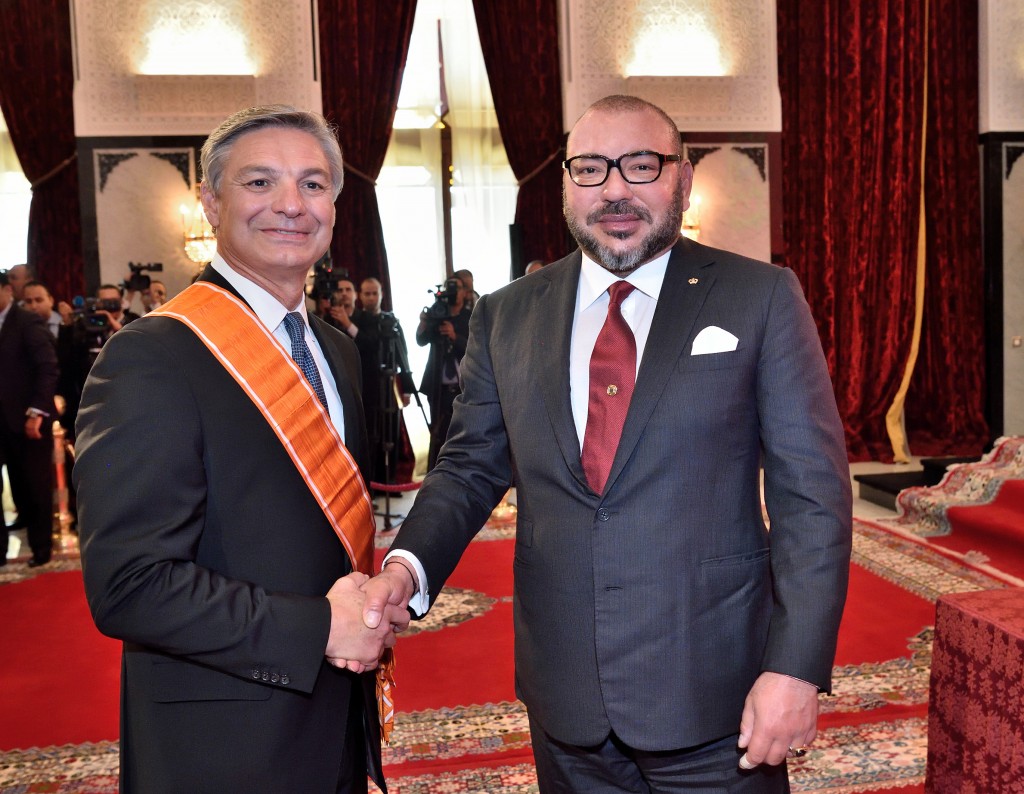 Washington, DC, September 27, 2016 (MACP) – Today, the Kingdom of Morocco and Seattle-based aerospace company Boeing announced plans to establish a Boeing industrial ecosystem in Morocco that will bring 120 Boeing suppliers to the country, create 8,200 skilled jobs, and generate $1 billion in exports. The Memorandum of Understanding outlining the project, signed by Morocco’s Minister of Industry, Trade, Investment and the Digital Economy Moulay Hafid Elalamy and Boeing Vice Chairman Raymond L. Conner, comes just days before Boeing is set to host the third annual US-Morocco Trade & Investment Forum in Seattle on October 3. The conference brings US business leaders together with Moroccan officials to learn about investment opportunities in the Kingdom.

“The Moroccan aeronautics industry has seen, thanks to [the vision of King Mohammed VI], huge growth these last few years. The sector has multiplied by six in 10 years and today boasts 121 companies,” said Mr. Elalamy at the signing ceremony, which was chaired by King Mohammed VI in Tangier.

“Through our business in Casablanca, we have already seen with our own eyes the unique opportunities offered by Morocco to aeronautics subcontractors in terms of cost effectiveness, all while producing quality products,” said Mr. Conner at the event.

Boeing has had a presence in Morocco since at least 2001, when the company became a co-founder of Morocco Aero-Technical Interconnect Systems (MATIS) Aerospace, which produces parts and engines for Boeing jets and employs 850 people in Casablanca. Boeing is also the preferred manufacturer for Moroccan national airline Royal Air Maroc, which earlier this month launched thrice-weekly non-stop flights between Washington Dulles International Airport and Casablanca on a Boeing 787 Dreamliner.

The new aerospace ecosystem will further cement Boeing’s presence in Morocco by bringing suppliers to the country, building factories, and streamlining the manufacturing platform. Boeing has also agreed to train the local workforce to meet demands for skilled labor.

In a call on aerospace opportunities in Morocco organized on Monday by the State Department’s Bureau of Economic and Business Affairs, US Ambassador to Morocco Dwight L. Bush said, “With a strategic geographic location and historic ties at the crossroads of Europe, Africa, and the Middle East, and its pursuit of integrated supply-chains and entrepreneurial opportunities, Morocco has developed into an important regional player in supplying the aircraft industry for Europe, the Americas, and around the world.”

Walter Siouffi, President of the American Chamber of Commerce in Morocco, noted on the call, “I think what’s impressing us the most about Morocco is the forward planning and thinking that the government has been embarking on as far back as the early part of 2000. And part of that thinking was that Morocco, given its proximity to Europe, after analyzing the competitive advantages it has in terms of logistics, distance, free trade agreements, labor, etc, figured out really early on that it could be an important part of the supply chain to companies in the aerospace [and other] sectors.”

In recent years, Morocco has successfully positioned itself as a gateway for US companies to African and European markets, and through aggressive economic reforms has become a top destination for foreign direct investment in Africa. Earlier this year, the 2016 Bloomberg Innovation Index named Morocco among the 50 most innovative economies in the world, and one of just two such in Africa. The results echoed the findings of many industry reports of recent years. KPMG International and Oxford Economics’ 2015 Change Readiness Index (CRI) ranked Morocco as the most “change-ready” country in the Maghreb, with particularly positive results in the category of “enterprise capability.” The World Bank’s Doing Business 2016 ranked Morocco first out of 20 MENA countries for “ease of starting a business” and placed it sixth overall in the region for “ease of doing business.”