On a grey, chilly winter day in Washington in January 1999 after a long and thorough discussion, I left a typical upper floor State Department conference room very pleased that a group of interagency seniors had made a great decision to advise dumping a failed policy concerning the future of Western Sahara in favor of a new approach. I believed that decision would not only lead to resolving this conundrum, but also salve the ugly abrasions it had inflicted on our long, friendly and fruitful relationship with the Kingdom of Morocco. It was a good day and I was pleased about the new opportunity ahead.

An Impossible referendum was dead, an enduring stalemate broken.  A solution based on reasonable compromise and the clearly better, if not best, interests of all concerned beckoned.  Both parties could get most of what they wanted and legitimately deserved, even though neither would get everything on their wish list. Diplomacy at its best.  Now we just had to sell it.

I  expected it would be a difficult sale in Algiers and Tindouf and realized as well that some heavy lifting would also be required in Rabat. What I did not fully appreciate, or even imagine, was that 18 years later I would still be trying to close the deal in Washington where the idea originated. But that is where it is today.

Come next January, my colleagues and I will again begin working this problem with a fourth American  presidency.  If you had asked me back then if I believed this would take a full generation to move……well.?  As they say, nothing you win today in Washington can’t also be lost tomorrow.  So here we go, again.

Since 1999, the standing policy of the United States has been to support a resolution to the Western Sahara based on a formula that would leave Morocco sovereign in the region, but grant a substantial power of self governance to its population through autonomy. This was the core bargain we argued that winter day way back then.  It is as valid today as it was then. It was not only the best possible solution, it was, and is, the only possible solution.

So where is the problem? Oddly enough, the problem is not so much trying to get a sale in Algiers or Tindouf. The problem is that neither Algiers nor Tindouf actually believe that Washington has much interest in making the sale. And they have good reason to doubt it. 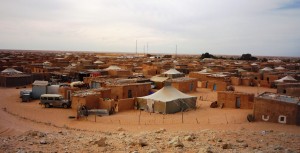 President Bush and his most senior foreign policy officials called Morocco’s 2007 autonomy initiative (yes, we did make the sale in Rabat and long before 2007) “serious and credible.” President Obama’s first Secretary of State, Hillary Clinton, agreed with that assessment and added the word “realistic” to what is now the standard boilerplate from all senior US Government officials.  Problem is, its not enough to talk a good game. If you want the other folks to believe you are serious, if you want to close the deal, you also need to actually play a good game.  Meaning, you need to back up the pretty words with demonstrable evidence that they are more than just pretty words.  This is often the case with many difficult foreign policy problems.  Words without deeds eventually empty the words of all meaning and the longer you protest your sincerity without backing it up with tangible proof the more meaningless the words become. Washington’s tepid verbal support for resolving Western Sahara through some formula trade off on sovereignty/autonomy has become empty and vacuous.

What we need now are deeds.  No need to bring out the big guns and attempt to bludgeon the opposition into submission. Not necessary right now. All we really need at this point is for Washington to begin to take a series of incremental , visible and concrete steps to signal without ambiguity to an understandably reluctant audience in Algiers and Tindouf that it has had enough of the status quo and now plans to get seriously behind its own big, bright, shiny idea about how best to resolve this problem.