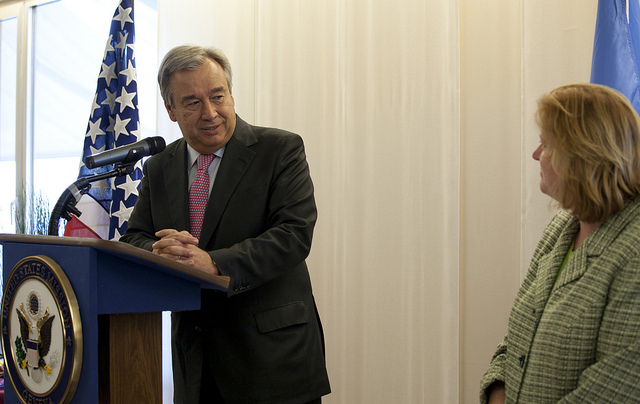 The new UN Secretary General, Antonio Guterres, has given speeches indicating his priorities for both the UN’s external operations and the consistent issue of internal reforms. He strongly believes that the UN must look beyond conflict resolution to conflict prevention and emphasizes a more holistic approach to its programs. For example, in an address to the World Economic Forum (WEF), he “called for a new generation of partnerships with the business community to limit the impact of climate change and to reduce poverty.”

He said, “The best allies of all those that want to make sure that the Paris Agreement is implemented, the best allies today in the world are probably in the business sector and it is very important to fully mobilize them.” Following on the broad international consensus reached at COP 22 in Marrakech, Mr. Guterres’ remarks further emphasized the need for continuous support for actions to reduce carbon emissions and re-engineer infrastructure to promote sustainable development. “Without the private sector we will not have the necessary innovation, we will not have the necessary capacity to discover new markets, new products, new services and to be able to develop new areas in the economy,” he said, adding that only the private sector can create enough jobs to stabilize societies.

Mr. Guterres called for long-term dialogue and partnerships between the private sector, international organizations, and governments to expedite the application of new technologies to accelerating human development as “the only way to allow such advances to bring ‘fantastic increase in the well-being of people’ and prevent them [technologies] from turning into “a nightmare for mankind.”

Mr. Guterres served as the UN High Commissioner for Refugees for a decade before becoming Secretary General. He is extremely knowledgeable about the challenges of adopting progressive policies for dealing with refugee issues. This has greatly informed his approach to human rights issues as well. According to his office, his efforts at conflict prevention and resolution will not be limited to taking diplomatic action, but will attempt a comprehensive approach based on the UN’s core principles of ensuring peace, security, sustainable development, and human rights.

“The best prevention is sustainable and inclusive development,” he said in the speech, pointing out that while the world is witnessing unparalleled technological progress, increasing volumes of trade, reduction of poverty and progress in living conditions, inequality has increased substantially. Meanwhile, the globalization of communication has made everyone aware of rising inequality, leading to frustration and fueling conflict.

The migration issue is of keen interest to Morocco, which is pioneering refugee normalization in North Africa. Guterres said at WEF that “The UN General Assembly is attempting a renewed global compact on refugee protection, which needs solidarity particularly from countries that form the first line of reception. Countries must take a fresh look at migration, which is here to stay, and is part of a solution and not a problem. It needs to be managed better, and stronger international cooperation is needed to make migration painless and a force of good for both migrants and receiving communities.”

Guterres reiterated his resolve to reform the management of the UN, including changing rules on staffing and budgeting, for instance, as well as decentralizing and streamlining systems to make the UN a more nimble, efficient and effective organization. It is not well understood that 70% of the UN’s budget is for peace-keeping operations, which greatly hampers his capacity to support new initiatives.

His early steps are being followed closely in Morocco, as it looks for his leadership to resolve the long-standing stalemate on the Western Sahara, which, according to standing UN Security Council resolutions, is to be achieved through a political settlement. This position represents the Security Council’s recognition of Morocco’s compromise proposal in 2007 to grant broad autonomy to the Western Sahara under Moroccan sovereignty. This proposal has received extensive international support and has been called a serious, realistic, and credible approach by successive US administrations.

Despite continued threats of a return to war by the new leadership of the Polisario and a series of provocative actions — most recently its announced intention to impose settlers in the neutral zone between Morocco and Mauritania — there is hope that Mr. Guterres’ long relationship with Morocco and shared efforts to manage the migration issues of African emigrants, will give impetus to this autonomy solution rather than prolonging the crisis.

The Western Sahara will be high on the agenda of the Security Council in April, when it votes to renew MINURSO’s mandate to prevent conflict on the ground and promote Sahrawi family visits and other enabling measures. Long before that, Mr. Guterres will be naming his special envoy to the conflict to draft the assessment report for the Security Council’s review. Given his long familiarity with the conflict, the positive role that Morocco is playing on a range of UN-related issues, and the need to firmly establish a roadmap to stability in the region, Mr. Guterres has a singular opportunity to demonstrate leadership that has been absent at the UN.